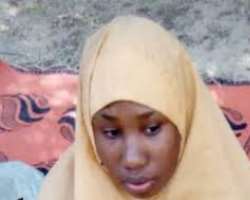 Leaders of the Christian Association of Nigeria (CAN) Wednesday held a church service and a peaceful march to mark the second year of Miss Leah Sharibu in Boko Haram captivity.

Leah along with over 100 girls were forcibly abducted by Boko Haram insurgents from their hostel at the Government Girls Science Technical College, Dapchi, Yobe State February 19,2018.

Though her mates were later released, she was held back for refusing to renounce her Christian faith. There were reports late January that she had given birth to a boy.

In Abuja, CAN President Rev. Samson Ayokunle and the Senior Pastor, Dunamis International Gospel Center, Dr. Paul Enenche, warned that killings in the country could lead to anarchy

At a news conference in Abuja to mark the second year of Leah’s abduction, Rev. Ayokunle and Enenche said since the Federal Government was not unaware of the killings in the country, it must take urgent steps to defeat Boko Haram.

Rev. Ayokunle, who was represented by CAN Vice-President, Caleb Ahima, said: “CAN has been calling and talking to the government and I think it (government) is obvious of the persistence of this evil.

Pastor Enenche, who was the convener of the event, expressed displeasure over the way and manner government is handling Boko Haram. He called on those sponsoring evil to desist or face God’s punishment.

His words: “I think that this day is one of the saddest in the history of our nation. There has been a high level of willful ignorance on the part of the entire nation. It looks like some people are telling some fake stories.

“What kind of situation have we found ourselves? And who in this nation will be sincere enough to say that everything is right? If this is not a state of emergency of a very calamitous dimension, what are we experiencing?”.

CAN called on the Federal Government to react to a video footage indicating that the Turkish government is one of the funders of insurgency in the country.

“We are disturbed by the failure of the Federal Government to react to the footage going round that the Turkish government is allegedly funding the terrorists,” CAN said in the statement by its Director, Legal and Public Affairs , Evangelist Kwamkur Vondip.