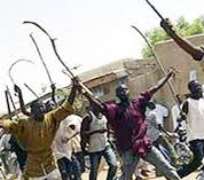 Igbo Mandate Congress have received intelligence reports from credible sources within Miyetti Alah that some Fulani herdsmen will attack Ifite-Owari and Anaku communities in Anambra State within the next three months in retaliation for the alleged murder of some herdsmen.

Two leaders of Miyetti Allah, who pleaded anonymity, told the Director General of Igbo Mandate Congress Reverend Obinna Akukwe in Awka over the weekend that the families of the four middle-aged men allegedly killed are seeking for revenge. They claimed that younger elements within Miyetti Allah are pushing for revenge. They gave the name of the youth leader seeking for bloody revenge to the leaders of Igbo Mandate Congress and asked them to initiate peaceful settlement before the executioner groups are called in from Bauchi.

They claimed that Anaku people have been beating up herdsmen, denying them water and safe passage and instigating nearby communities against them.. The aggrieved herdsmen believed that even Aguleri, Governor Obiano’s hometown gave them some land and wondered what is so special with Ifite-Ogwari and Anaku that they will not have peace.

In the aftermath of the foregoing, Igbo Mandate Congress wishes to alert Ohanaeze Ndiggbo, CAN, PFN, GAAICOM and relevant members of the diplomatic community of the plot to turn Ifite-Ogwari and Anaku into a theatre of war by misguided Fulani herdsmen.

Igbo Mandate Congress had on February 10th, released a report to CAN, PFN,Ohanaeze on the situation on Ifite-Ogwari and the continued detention of the Deputy President General and Chief Security Officer of the Town, Chief Nwaora Ikeozalla and Chief Michael Akamala respectively.

Igbo Mandate Congress in the earlier report noted that the Elders of Ifite-Ogwari had complained incessantly of constant raping of their girls and mothers and the Obiano government told them to forgive their enemies. The Elders insisted that there was no reported communal attack on herdsmen and that any such allegation of killings between December and January are concocted allegations. They claimed that if anybody ever died, as claimed by Miyetti Allah, it could be as a result of a private clash between an infuriated farmer and a rapist herdsman, and the community was not involved in it.

Igbo Mandate Congress called for the release of the detained elders and appropriate compensation paid them for illegal incarceration. IMC called upon Ifite-Ogwari youths to suspend any planned reaction and allow a solution to be worked out within the next few days by concerned Igbo leaders.

Igbo Mandate Congress, in the aftermath, notes the following:

Igbo Mandate Congress noted that the Incarcerated leaders were released on Tuesday, after twenty days in detention. The detained elders have contacted diseases are being treated in herbal centres for ‘Kwarikwata, Crawcraw’ along the scrotum and armpits.

IMC also noted that Ifite-Ogwari community elders were forced to raise tens of millions to settle MIyetti Allah while their destroyed farmlands and raped women have no compensation.

The Miyetti-Allah who smiled to the bank with millions is still planning an attack on the community.

Igbo Mandate Congress advises the Miyetti Allah not to open another war front for their kinsman, Muhammadu Buhari, whose presidency is already imperilled by aggrieved opposition party, disgruntled ex-generals colleagues and general disenchantment over insecurity thawing him from different angles. Any attempt to exhibit recklessness in Ifite-Ogwari or Anaku will destroy the Buhari’s Fulani presidency.

Igbo Mandate Congress appreciates the efforts of concerned Igbo leaders in Abuja and the US who are already planning a protest in conjunction with IMC at both National Assembly and the Nigerian Embassy in Washington before news of the release of the elders filtered out. The efforts of former Ohanaeze Scribe, Barrister Emejulu Okpalaukwu and Speaker, Hon Uche Okafor are commendable.

Igbo Mandate Congress noted that the CP of Anambra State, John Abang, released the elders in defiance of orders from above, when security reports suggest the three week continued detention of the old men is heightening tension in the state.

Igbo Mandate Congress thanks the two true sons of Abraham from the Fulani community who squealed on the plot to invade Ifite-Ogwari and prays that these agents of peace will not lose their rewards both now and afterwards in Jesus name.

Igbo Mandate Congress assures Ifite-Ogwari Community of its reliable support, and advices the youth to be on high alert while not initiating any act capable of violence.