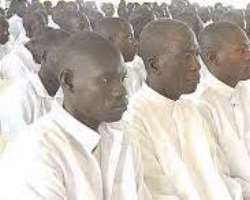 The prominent civil Rights advocacy group – HUMAN RIGHTS WRITERS ASSOCIATION OF NIGERIA (HURIWA) has warned that the proposed bill to legislate the outright pardon of armed terrorists under the guise of deradicalization programme could result in civil war either in the short, medium or long term. The bill is sponsored by Ibrahim Geudam of Yobe East Senatorial District and was read for the first time on the floor of the Senate. The bill seeks the establishment of an agency that would ensure the REHABILITATION, DERADICALISTION; and REINTEGRATION of the so-called repentant terrorists in Nigeria. But HURIWA has warned that the bill is unconstitutional and offends all relevant anti-terrorism Laws of the federation.

“Let us from the HUMAN RIGHTS WRITERS ASSOCIATION OF NIGERIA (HURIWA) caution the section of the National legislators who are actively conniving with armed terrorists to introduce a satanic legislation that will overlook the mindboggling crimes of genocides committed by terrorists and the killings of over 30,000 innocent Nigerians in the last ten years with the view to appease terrorists even when the victims of terrorism are scattered in different internally displaced people camps in Nigeria and are external refugees in so many near by Countries.”

HURIWA has categorically warned thus: “If this bill to legalize the freeing of arrested terror suspects under any guise succeeds, then the nation should be prepared for the consequences of their unconstitutional action because the hundreds of thousands of innocent victims of the terrorists attacks in the last decade will definitely not fold their hands whilst those who killed their loved ones are pardoned through roguish means by the passage of this criminally minded bill that is meant to legalize belonging to terror cells and participating in mass murders.”

“This bill before the senate is not only satanic and unconstitutional, but will paint the picture of a rogue nation because in all civilizations, those who declare war against innocent citizens and participate in genocide are rounded up and prosecuted and made to face the full weight of the law. History is replete with a plethora of trials of persons who have joined terror gangs and carried out mass killings. The plot by the National Assembly to therefore permit the wanton defecation of the constitution of Nigeria by forgiving mass murderers must never be allowed to succeed, ” HURIWA affirms.

In the statement endirsed jointly by the National Coordinator Comrade Emmanuel Onwubiko and the National Media Affairs Director Miss Zainab Yusuf the Rights group said that: "The government must engage in a law based war by enforcing anti-terrorism laws. Section 1A (4) of the TPA (as amended) empowers “the law enforcement agencies” to “enforce all laws and regulations on counter–terrorism in Nigeria”. Prior to the TPA, Section 46 of the EFCC Act 2004 defines “terrorism” to mean a violation of the Criminal Code or the Penal Code and with likelihood of endangering life, integrity or freedom, or causing serious injury or death with the intent to force the person(s) or body or government to do or not to do certain things or disrupt and includes financing or aiding terrorism. The punishment for the crime by Section 15 of the EFCC Act is imprisonment for life."

HURIWA has also stated that even before the Senate came up with this bad piece of proposed legislation to pardon terrorists, It is difficult to dismiss the general notion that the Nigerian State has not shown political will and commitment to the war on terror. "It seems that not only have the real brains behind it not been prosecuted but are also being shielded. An ideology based crime does not end with the incarceration of the “foot soldiers”. Unfortunately usual extra judicial killing of high profile suspects suggests a pattern of cover up. Both Mohammed Yusuf and Alhaji Buji Foi, Boko Haram leader and the financier respectively, suffered the same fate while in police custody."

"Closely related is the manner of enforcement of the law on the subject; enforcement must be within the arm bit of general sense of legality. This implies that government should be conducted within the framework of recognized rules and principles which restrict discretionary power as opposed to the uncertain and crooked cord of discretion as held by the Court in the cases of Miscellaneous Offences Tribunals v. Okoroafor (2001) 10 NWLR (Pt. 745) P. 310 and All Nigerian Peoples Party v. Benue State Independent Electoral Commission (2006) 11 NWLR (Pt. 992) p. 597. "

“It is not the English view of the law that whatever is officially done is law … On the contrary, the principle of English law is that what is done officially must be done in accordance with the law..”

HURIWA argued further that: "Nations which have achieved stability and national security are those which have elevated law above political, religious, ethnic sentiments. The present federal government must be compelled to advocate national security on the basis of respect of not only individual rights but also the rule of law but definitely not the appeasement of terrorists."