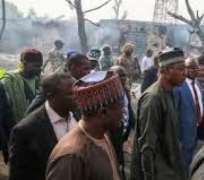 The Nigerian Bar Association (NBA), Maiduguri Branch, has appealed to the Federal Government and the military in particular to review its security architecture with a view to ending counter insurgency war in the Northeast.

Briefing journalists at the NBA House, Maiduguri on Saturday, the NBA chairman, Maiduguri branch, Barrister Mohammed Umar said: ”we call on the Federal Government to review its security architecture with a view to ending the insurgency in the Northeast and the ouuntry at large.

While recognizing the sacrifices of the men who ultimately pay the supreme price in order to defend thier father land, the NBA chairman said: ”the NBA is also calling on the leadership of the Military to review its strategy of clossing the Maiduguri Damaturu High way in the name of security cover, because it is doing more harm than good to our people”

He argued that the closure of the road is contrary to the provision of chapter IV of the constitution of the Federal Republic of Nigeria 1999 (as amended) particularly section 41 which guarantees freedom of movement.

” This Auno attacked would have been abetted but the fact that the military strategy of closing the road by 5;00 pm, thereby denying access to our people In contravention of the provision of chapter (IV) of the constitution of the Federal Republic of Nigeria. 1999 (as amended), particularly section 41 which guarantees freedom of movement has always resulted to causing of greater hardship than good ”

He said the road should have been made open from 6:00am to 10 ;00 pm as it is obtainable in Yobe state so that people would not be trapped and exposed to danger because commuters will only leave Damaturu when they know that they will enter Maiduguri before the curfew time or go back to Damaturu, stressing that the military should device a means of separating good citizens from.Boko Haram.

The NBA while condoling those that lost their lives in the attack, prayed that God in His infinate mercy grant their souls a peaceful rest and the families they left behind the fortitude to bear the irreparable lost., saying that ”we are devastated and shocked on how these innocent lives were brutally and fatally murdered in such a way that they were burnt along with their property. ”

The NBA therefore condemned in strong terms, the barbaric, heinous and gruesome act on drivers, commuters and passersby in.Auno that led to the loss of lives and burning down of property worth millions of Naira by the dreaded members of Boko. Haram

He called on the general public to report to the security agencies nearest to them whenever they saw any suspicious movements or objects and the military to take serious any information given to them.