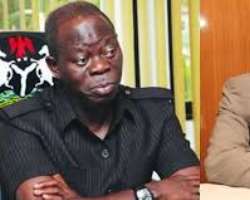 Reno Omokri, former aide to ex-President Goodluck Jonathan, has described Adams Oshiomhole, National Chairman of the All Progressives Congress, APC, as an unstable human being.

Reacting to a photograph of Douye Diri being inaugurated last night, Omokri said Oshiomhole was determined to destroy both APC and Nigeria due to his selfish interest.

In a post on his Facebook page, the former presidential aide insisted that the violence witnessed in Bayelsa State on Friday were caused by the APC National Chairman.

He, however, urged the International Criminal Court, ICC, to take note since Nigerian government wouldn’t take action against Oshiomhole over his inflammatory comments.

Omokri wrote: “This photograph of Douye Diri being sworn in as the PDP Governor of Bayelsa proves that Adams Oshiomhole is an unstable individual, who talks before he thinks, and thinks more highly of himself, perhaps because of the inferiority complex of his Little Man Syndrome!‬

“The unrest in Bayelsa earlier today is directly linked to Oshiomhole’s irresponsible comments of yesterday. Not content with destroying the APC, Oshiomhole wants to destroy Nigeria.

“Since the Nigerian authorities will not do anything, I hope the International Criminal Court is taking note.”

‬The Supreme Court had on Thursday sacked David Lyon of the All Progressives Congress, APC, as the governor-elect of Bayelsa State.

It also declared Diri of the Peoples Democratic Party, PDP, winner of the election and ordered the Independent National Electoral Commission, INEC, to issue him Certificate of Return.

Following the ruling, Oshiomhole had vowed that nobody would be sworn-in as governor because Lyon had the highest number of votes.

Despite Oshiomhole’s threat, INEC had declared Diri winner of the election and subsequently issued him certificate of return.

Photographs, however, emerged late last night indicating that Diri was sworin-in as governor of the state.