Oluwo allegedly beats up another traditional ruler over land dispute 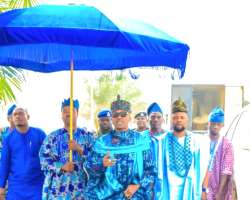 A prominent traditional ruler in Osun State, the Oluwo of Iwo, Oba Abdulrosheed Adewale Akanbi and another monarch, the Agbowu of Agbaagbaa, Oba Dhirulahi Akinropo today had a scuffle in Osogbo, the state capital.

The traditional rulers were at the office of the Assistant Inspector General of Police, Zone 11 for a peace meeting when the crisis happened.

The Nigerian Voice gathered that the monarchs had misunderstanding, engaged in altercation which led to the scuffles.

Oba Dhirulahi sustained injury during the fight and he was rushed to State Hospital, Asubiaro for treatment.

The AIG was said to have invited the monarchs to settle a land dispute for them.

Oluwo told journalists that the incident should not be seen as an issue. "it was a no issue". Oba Akanbi said