Lyon out, Diri in 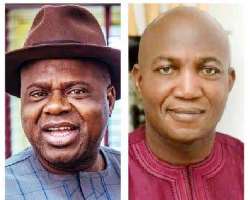 The United States electoral system faced a gargantuan challenge in 2000 when George Bush Jr, the then Governor of Texas and Al Gore, the then US Vice-President squared up in the presidential elections. Gore, the Democratic party nominee won the popular vote but there was a bone of contention between them in the electoral college vote. The state which was the decider of the winner of the contest was Florida where Bush’s younger brother, Jeb Bush held sway as the Governor. The matter went to the Supreme Court and by a vote of five to four, Bush was declared the winner of the elections which greatly polarized the country. Gore accepted it in good faith and congratulated his rival.

The power of the electorate in Nigeria to decide who governs them is fast becoming a relic as that power has been shifted to the Supreme Court. These unelected men and women sit in faraway Abuja and with their powerful judgements upturn the votes that the electorate decided under the sun and rain. From Peter Obi to Rotimi Amaechi, Adams Oshiomhole, Hope Uzodinma and now Douye Diri, the unpopular in the polls suddenly found themselves at the helm of affairs in their respective states.

The latest is that of Douye Diri, the candidate of the Peoples Democratic Party in the November 16 gubernatorial elections in Bayelsa state. INEC earlier declared David Lyon,

the APC candidate as the winner of the elections and he was overjoyed and painted the town red and was eagerly waiting for his swearing in on Valentine’s Day today.

The Supreme Court led by Justice Mary Odili, the former First Lady of Rivers state nullified his electoral victory on the grounds that his deputy, Biobarakuma Degi-Eremienyo falsified his educational credentials and presented the forged documents to INEC. Lyon must be in pains now as he is paying for the insincerity of his deputy who has now truncated his ambition which he has nursed for a very long time.

APC National Chairman, Comrade Adams Oshiomhole opined that there will be no swearing in for the new governor-elect since he didn’t meet the required twenty-five percent of two-thirds of the vote in the state.

The former Edo state governor was right and this will spark another round of constitutional crisis in the oil rich state. Gleaned from PM News, Bayelsa has eight local councils, Southern Ijaw, Ogbia, Nembe, Sagbama,

But according to the results published by INEC on November 18 when David Lyon was declared the runaway winner, Diri only made 25 per cent clearly in four LGAs, with a fifth council, Brass close to call. He made it in Ekeremor, where he won 18344 votes, to APC’s 21489. He won massively in Sagbama with 60,399 votes and Kolokuma/Opokuma. He also met the requirement in Yenagoa, where he polled 19184 votes, to lose to APC 24,607 votes. In Brass, he polled 10, 410 votes to APC’s 23, 831 votes. Depending on cancelled votes, Brass may be on the borderline.

However, Diri was shut out in three LGAs of Nembe, Southern Ijaw and Ogbia.

INEC today declared Diri as the winner as they relied on the Supreme Court Judgement and the Chairman, Prof.Mahmoud Yakubu said that the certificate of return will soon be issued to him and his deputy.

This is a catch-22 situation since Diri’s victory fell short of what the 1999 constitution says.

Oshiomhole gave the hint that the APC will return back to the court to ensure that the wish of the majority of Bayelsans isn’t truncated on the grounds of an asinine technicality.

It will be interesting to see how this case will end. When a similar case happened in Bauchi state in 1999 when the deputy to Alhaji Adamu Mu’azu presented forged documents to INEC in the build up to the elections, his electoral victory was nullified by the apex court in the land and a re-run was later held.

Since there is a constitutional issue as to the legitimacy of Diri’s victory, why didn’t the court order a fresh re-run instead of delivering this extremely controversial judgment that leaves a huge question mark as to the authenticity of his victory?

As the last hope of both the common man and the elite, the judiciary as the third arm of government has the responsibility to ensure just judgments without fear or favour. This judgement leaves a lot to be desired as the will of most Bayelsans wasn’t reflected in it.

A report from Daily Trust reveals that some thugs loyal to the APC invaded the residence of Diri and have been wreaking havoc to both the people and properties alike. This is what obtains when the popularity of the state’s number one citizen is in question. While not being a supporter of violence, I oppose any agenda by the apex court to install a candidate whose election wasn’t a genuine reflection of the people’s wishes.

The latest fad in town seems to be running back to the Supreme Court for a judicial review. Emeka Ihedioha of Imo state did it and David Lyon may consider it as well.

Let’s see if the Supreme Court will reverse itself and set a new precedent.