Response To The Claim Of Fulani Ownership Of Nigeria By Salisu Badu Ahmad, Leader Of Fulani Nationality Movement (funam). 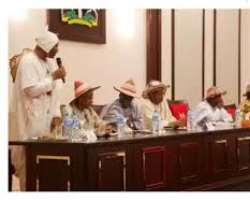 Though, like every other right-thinking Nigerian, I regret the necessity of dignifying your blasphemous utterances of 2nd of February, 2020 on The Nigerian Voices news media with a reply. Without any intention to engage you in words banter, I however feel mandated to unapologetically put it to you as follows:

You will recall that you earlier made a provocative statement following the gruesome massacre of my people in Benue state by your people who made our women widows, our men widowers, our children orphans and our young men homeless. Our women were raped beside the lifeless bodies of their husbands while their helpless children watched; yet you saw no wrong in such barbarism, inhumanity and incivility, but rather boasted about the existence of the Fulani Strike Force that coordinates and carries out what you called retaliatory/counter attack on my people. You may wish to know that the cry of the innocent blood of the Agatu People of Benue has reached unto the Lord and not only that the Lord has risen for them in great indignation but that this affliction must not arise the second time.

On your fictitious, baseless and unfounded claim of the Fulani ownership of Nigeria, from Sokoto up to the sea sure, come with me down the line of history and It may interest you to know that the Fulani are not originally Nigerians but immigrants who came in under the guise of peaceful migrants to Gobir and other cities of Hausa land (Northern Nigeria).

From time immemorial down to the first and second Kanuri (Bornu) Empire of 800-1470 and 1472-1603 respectively, no mention of the Fulani or its acclaimed Empire was made. The new Bornu Empire only gave birth to a group of related city states commonly known as Hausa Bakwai (or Seven Hausa States.) from Biram to Daura down to Katsina, Kano to Gobir which is the recipient city of the Fulani parents of Usman Dan Fodio who immigrated from Mali). Notably also was the fact that Northern Nigeria had its indigenous Hausa traditional religion before the advent of Islam in the eleventh century, during the reign of Humai, son of Sulumanu who was reputed as the first Muslim ruler in the Kanem Bornu Empire. The early Monarchs of Bornu were devout men of Islam which was and had always been a very peaceful religion as it was known to, held and practiced by them. I refer you to the life and death of Dunama, the King of Bornu who succeeded Humai. He performed the Muslim pilgrimage twice and finally drowned at the red sea during his third journey. He didn’t kill anyone. He was no Fulani man but a true Islamic Hausa man of Bornu origin.

Bornu Empire undoubtedly became the seat for Islamic learning and practice in West Africa giving birth to the drive to apply Islamic principles in conduct of government (Sharia law) i.e. the Islamizing of Hausa land agenda which took off through a peaceful evangelization by pilgrims, merchants and mallams. One historical fact then was that, Islam made little impact because it was a religion of a miserable small minority of aliens who were considered peaceful and harmless. This was the bases why for example, Alkali, the first Sarkin-Kebi of Kebbi accepted Islam but tolerated the majority of his subjects who remained non-Muslim. So the early attempt at Islamizing Hausa land never took a violent form until the rise of the first Jihad campaign in June, 1804 when the SHEHU’S FORCE (a group of Fulani renegades) raised by Usman Dan Fodio, took up arm against the Kingdom of Gobir under the guise of religious purification crusade. Regrettably the ruin and conquest of the Kingdom of Gobir by the Fulani obviously revealed that the so called Jihad was actually never a religious purification crusade but a political struggle for ethnic cleansing, territorial dispossession and acquisition, ethnic domination of the Fulani and political unification through sporadic violence and military might- A war between the Islamic Fulani and non-Islamic Fulani on the one side and the Hausas on the other side. Needless to remind you that the first face of Jihad was the successful subjugation of Hausa land and establishing the Controversial Fulani Empire; the second face was the failed attempt on Empire and the third face was the southern expansion of the Fulani conquest to Nupe and Ilori on the fringe of Yorubaland and no more.

IF YOUR JIHAD MOVEMENT IS FOR THE DEFENSE OF ISLAM, WHY WAS THE FAILED ATTEMPT TO CONQUER BORNU EMPIRE, THE CENTER AND SEAT OF ISLAMIC LEARNING IN AFRICA?

This was the question, El-kanemi of Bornu put in writing to Mohammad Bello, the son and subsequent successor of Usman Dan Fodio when he was planning to attack Bornu under the cloak of Jihad. El-kanemi of Bornu was absolutely right when he accused your ancestors of “fighting for political power under the guise of religion”. The fight is not for the defense of Islamic religion, but a ruthless greed for political power, territorial domination by oppression and unacceptable use of force.

Finally, in the light of your ridiculous claim of the ownership of Nigeria from Sokoto to the Sea sure, threatening to “take it by force”, I posit that this is the fourth Jihad; an organized desperate move to extend your forceful conquest beyond Northern Nigeria to the rest part of Nigeria which to your own ruin, you veiled in the killing of Christians and defenseless Nigerians using the instrumentality of Fulani Headsmen and other terrorism outfits.

Let me remind you of a fundamental truth you seem to have forgotten. You are a mere man whose life is in the palm of the Almighty God and can be crushed at The Lord’s own instance; But you pride yourself up with the highest height of arrogance like if you are god and indestructible. You assume for yourselves unhealthy monopoly of power and violence. You put people in atmosphere of fear by your brutalities.

Here is a message for you from The Living God: