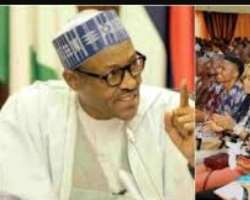 Youth-friendly policies of the AU and homily by UN that countries should take youths into their policies seem not applicable to youths in Nigeria.

Not garnering the political will they needed, youths in the country believe that a youthful president will benefit the country and enhance the electoral law. The youths’ philosophy is laced with a view that old age has something to do with implementation of programmes. They hinge their point citing the United Kingdom that liberalized her age of candidacy for elective positions.

Therefore, Nigerian youths were worried to replace President Muhammadu Buhari as President of the Federal Republic of Nigeria due to his recurring health challenges as soon as he was elected into office in 2015. Their advocate for this elicited in 2017, when a 39-year old Emmanuel Macron was elected as President of France. They wanted a youthful presidency. They wanted Nigeria to be headed like Prime Minister of Ireland; Leo Varadkar, Sebastian Kurz foreign minister and many more countries across the globe where youths represent their decision-making and governance.

Gap in youths political will
Examinations are that age bracket of youths varies from country to country. For instance, sources say that South African youth policy (NYP) classifies youth as those between 14 and 35 years of age, the Kenyan NYP uses 15-30 as a pointer and the Nigerian NYP, characterizes youths as those between 18 and 35. But the UN defines youth as the age legion of 15-24, and the African youth charter or young people, refers to every person between the ages of 15-35 years as a youth.

The highlight if this is that there is a projected 60 per cent of youths that make up 195,919,277 Nigerian population. Apprehension is that there is gap of political will by the successive Nigerian governments to empower the youths in politics. Views are that government's schemes such as agricultural empowerment and vocational skills are geared towards misleading youths who are within the age bracket of 18-35, not to think politics.

Not even the “Not-too-young-to-run bill” which was recently signed by the authorities has given the youths hope to submerge themselves in politics given that there is the youthfully lacuna in the decision-making and governance in the country.

Checks revealed that President Buhari while addressing a sitting (when signing the “Not Too Young to Run Bill” into law in Abuja) at the Council Chamber of the Presidential Villa, said that he would implore any of the youths warming up for the just concluded presidential ambition to eschew such view till after the 2019 polls.

His position was said to have garnered laughter, even among the youths who were present at the ceremony. “Please, can I ask you to postpone your campaigns (for a younger president) till after the 2019 elections?” said the president, who raised his head and looked at the section where the youths gathered.

This has heightened directives among those who know better, saying that there should be a revisit to the Constitution of the Federal Republic of Nigeria for inclusion for Affirmative Action for marginalized assemblage especially, such as youths.

The opinion leaders gave instance using the Ugandan Constitution as a case study, adding that it provides for groupings with special needs and care such as persons with disability, women, workers, youths and so on.

However, the population figure of 195,919,277 was a July 9, 2018 conjecture by Worldometers, an agency recording such data around the world.

Monetization and commercialization of politics

The youth percentage has increased over the period. The Executive Director, Conscience Nigeria, Mr. Tosin Adeyanju told journalists before the just concluded 2019 elections, “The major challenge will be finance because of the monetization and commercialization of politics today.

“Due to the country’s economic condition, it will be a Herculean task for young Nigerians to market new political parties that will give them space to vie for positions in the coming elections to the electorate.”

But President Buhari believed that by signing the bill, the youths have been given the leeway to excel in politics the same way they had done in music, sports, arts and sundry. This, perhaps, formed his views thus, “Your focus and contributions have now successfully increased and expanded the playing field for youths’ participation in politics.

“You, the young people of Nigeria, are now set to leave your mark on the political space, just as you have done over the decades in entrepreneurship, sports, arts, media, entertainment, technology, and several other fields.”

The immediate past President of the Senate, Dr. Bukola Saraki believed through his Special Adviser on Media and Publicity, Yusuph Olaniyonu, “It is one thing to be able to run, but it is another thing entirely to be able to serve.” This statement, many hold it against the elite, saying that they are bias in accepting in totality that the youths cannot deliver in elective positions.

Lack of level-playing field
A President of the National Youth Council of Nigeria, Chief Ikenga Ugochinyere was one of the persons that hold to this view that Nigerian elite are bias against youths in Nigeria.

Ugochinyere, who’s also the National Chairman of the Action Peoples Party, pointed out issues such as “funding, education, hooliganism and biased electoral process among others” as impediments to youths full involvement in Nigerian politics.

According to him, “The not-too-young-to-run bill is not a problem facing us. The major problem is the level-playing field. If you don’t control the army, the police and money to bribe electoral officers, at times, when you win, they change figures.

“So, the key thing is to build an independent electoral process from accreditation, voting, collation and so forth. Once those processes are secured and independent, anybody that is popular and loved by his people whether old or young, will win.”

As if that was not enough, Ugochinyere went further to say that poverty and economic achievements were part of the issues facing youths in Nigeria in politics.

He said, “Another issue is that of poverty and economic empowerment. Poverty and lack of jobs are hitting young people. This means that many young people, who would have loved to offer their services by seeking public offices, cannot do so, because they don’t even have the money for rent and feeding, let alone, hitting the campaign road.

Not only about age reduction
The reduction of age for vying for political offices is seen by some persons as politicians’ trick in their further art of manipulating the youths.

A legal practitioner, who doubles as social commentator and writer, Tosin Akande told newsmen, “Politicians have mastered the art of manipulation and sadly, the people keep falling for their tricks.

“Wasn’t it the same Buhari that allegedly ‘decimated’ the youths some months back in London? Oh, he saw the outrage and felt the NTYTR law should soothe frayed nerves.”

Akande was worried that barely a number of youths graduate from the tertiary institutions before 25 and many do not get married by 35. He juxtaposed his views with anxiety that for a youth who does not have a family, it may be a draconian task for him or her to deliver if given elective position.

This was even as he added that many youths are living with their parents and eating from their pots and plates even at above 35. According to him, “Let’s ask ourselves. How many of the over 60 million Nigerian youths graduate before the age of 25? This is the new age for eligibility for the state and Houses of Assembly and Representatives.

“If they graduate, what of the maturity required for such exalted offices? We all know how long it takes an average youth to get a good job, settle down and start living a decent family life. Is it just about age? Many Nigerian youths are not even married at 35 which is the least age requirement now for the position of the President. Where is the index of responsibility?

“If you haven’t managed a home, where is the proof that you can direct the affairs of a state? I’m talking about proof, not capacity. Millions of our youths might still be living with their parents either due to the economy or wait-for-it, metaphysical powers or household enemies, at age 35.”

Youths’ agitation groups
Outside the crop of modern days youths, data has it that the Nigerian youths started very well in the participation of democratic movement in Nigeria dating back to 1920s.

With their labor and creative prowess, Nigerian youths in those days established local newspapers such as the “Lagos Daily Newspaper” owned by Herbert Macaulay and the “Nigerian Daily Times” owned by Richard Barrow and Adeyemo Alakija in 1925 and 1926, correspondingly.

Investigations revealed that they used these newspapers to build confidence among themselves. This was even as Herbert Macaulay founded a political party known as Nigerian National Democratic Party in 1934.

However, not being allowed full participation in the mainstream decision-making and governance in the country, youths went out of their way to form agitation groups such as the Arewa Youth Consultative Forum (AYCF), TIV Youth Organization (TYO), Ijaw Youth Congress (IYC) to mention but a few. And their agitations saw to the “Not Too Young to Run Bill”.

Apart from that, data has it, “Youths through their activities as labour force, mobilizers for elections, voting strength, agitations for resource control, insecurity (kidnapping, cultism, armed robbery), electoral violence and disrupting economic activities (pipe line vandalism) amongst others impact the sustenance of democracy in Nigeria.”

Conclusion: global level
There is a voice all over the world clamoring for the inclusion of youths in decision-making and governance.

"The World Bank and UNDP indicated that the youth accounts for more than seventy percent of the Africa’s population. Yet, regardless of their numerical importance and the historical relevance throughout the region, they have been neglected from political arenas,” the experts say.

The youths are believed to be significant in the global population. Those who know better say that they are chief agents of socio-economic and political shakers and it's not a tea party to exclude them in the democratic landscape in the country.

“As a result of lack of political participation of youth on the continent, most of the younger population is disorganized, unemployed, and vulnerable to radical ideas such that lead to demonstrations against governments,” added the source.

Experts believe that youths should be heard and allowed to have a voice and express such a voice in their own future. Their participation in politics should not be limited. The experts reminded authorities to remember that youths were in 2011/2012, the brainchild of Arab States popular uprisings (popularly called Arab Spring).

According to the source, “This has been seen in Sierra Leone, where the disillusioned and unemployed youths had played a great role in establishing the revolutionary united front (RUF) and in Rwanda, where the youths were at the center in the genocidal.”

Sadly, not even the African Youth charter which was currently ratified by 23 African countries and signed by 37 countries could help the Nigerian youths in the 2019 elections held early in the year. The AU second education plan of action (2006-2015), to promote education across Africa couldn’t as well help the youths. Also, the AU 2009-2018 ten-year plan of action for youth empowerment and development, the commemoration of the African youth day and the implementation of the AU youth volunteer corps programmes regarded as distinguished achievements of AU to enhance the level of youth in Africa, couldn’t either foster the aspirations of the youths.