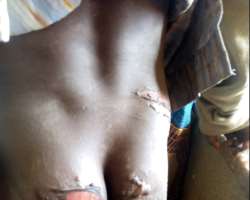 Men of Ogun State Police Command have arrested a man identified as Idowu Sikiru for inflicting injury on the body of his 5-year-old son, Segun Sikiru over an allegation that the small boy stole a fish.

The suspect who resides at Itowo in Oke Sopen area of Ijebu-Igbo was arrested following an information received by the police from members of the public who alerted the police that the suspect was about to kill the small boy. The DPO ijebu igbo division, Kazeem Solotan quickly mobilized his detectives to the area where the suspect was arrested.

Preliminary investigation revealed that the suspect accused the boy of stealing a cooked fish and he put an aluminum plate on fire and when the plate was red hot, he forcefully sat the boy on it, inflicting the victim with a serious burnt on his buttocks. He equally used the plate to burn the victim's fingers and part of his mouth. Segun Sikiru (Victim)
The victim has been taken to the hospital for medical attention.

The commissioner of Police, CP Kenneth Ebrimson ordered the immediate transfer of the suspect to anti human trafficking and child labour unit of the state criminal investigation and intelligence department for further investigation.

The police spokesman, Abimbola Oyeyemi said the suspect would be arraigned in court after investigation.