Immigration Is Dead Stay Home And Fight Your Prodigal Sons 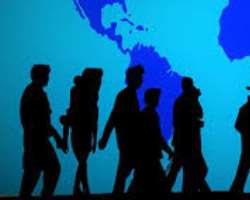 How hard is it to believe that in this day and age Africans are still looking at foreign visas and Investments to save them from themselves in order to escape the politicians you celebrate and sing their praises? The African prodigal sons you voted as leaders are laundering money abroad in Trillions that should have been used to create local jobs. But they are begging for millions in Investments and aids. This is after our Activists like Herbert Macauley, Kwame Nkrumah and Albert Luthuli fought for Independence.

The billions sent by African children working in Diaspora today are repackaged through Bureau de Change and laundered into foreign accounts and Panama shell companies.

If this is not reverse Robin Hood, we do not know what it could be. Look Africans, get a grip of yourselves. Foreigners have never seen you for anything else since 1600 but as slaves for free labor and economic tools to make a profit. This was the reason your land at home and abroad were turned into sugarcane and cotton plantation of free labor.

The days when neighbors and countries would take you in out of empathy, civil wars, religious differences, genital mutilation, sexual orientation and freedom are becoming favors of the past. You can no longer enter a country and apply for refugee status anymore. They had enough, and they are electing nationalists against immigration in charge of their countries. Seek Freedom at home, since you are getting too smart abroad, competing and beating your chests. They are not your white knights or gods.

The countries you are running to are looking for ways to kick their own citizens that do not look like them out. Why should they take more of you? Outsiders are no longer wanted since those that scrambled for Africa can achieve the same free labor in situ, instead of importing free labor to their countries. Slave ships and all the risk of revolts, Voodoo and riots that stopped slave trade, cost them too much headaches and lives.

When you fight and debase one another across artificial lines created at Berlin Conference during the Scrabble for Africa, expect Prodigal Sons as your leaders to use it for their selfish ends. You cannot use iniquities, rituals and vengeance in your culture and religions to seek refugee status in countries where peace and tranquility has forever been promised to African soldiers after World Wars. Their witchcraft, sacrilege, fetishes, ritual killings by constituted law enforcers and collateral damages are worse than yours.

Unfortunately, there are consequences, for deserting your own villages, states, culture and religion since you have to embrace the culture of your “saviors”. Right now, even being a member of the same religion will not find you compassion as a refugee. The days of: when you are in Rome, behave like a Roman are gone. They just want you to go back to Africa, make it attractive for profit (high interest rate and Free Trade Zone).

Brutal force, cages, walls, sea pirates, coyote and Libyan Asma Boys complemented their enforcement policies. These prevented the “invasion” by Caravans and Boat of people that tried to overwhelm the borders of Europe and America. They will not allow invasion, the way British Army invaded and forced Protectorates on African and Asian Ethnic groups with brutal force and mayhem against those that resisted.

Tolerance for one another has run its course. You would think we need an iron gate and missiles to protect ourselves from dominating one another. While it was true that cultures that accommodated and pride themselves on their welcome mat extended to outsiders are disappearing; nationalism has led to the rejection of the poor, the weak, those forsaken, the refugees of wars and economic exploitation. The more you beat your chest about your accomplishments abroad, the more you attract hatred and viciousness to yourselves. How did you even succeed despite the odds against odds?

The gate of the lauded freedom is closed, no need to justify their reasons. We cannot expect protection from our next door neighbors. But superpowers without surrendering our integrity or humanity in exchange? Usually, when we talk about civilized people, we mean people and neighbors that find ways of getting along with one another, within and outsiders without settling differences by war or violence. It is different to modernization and invention that may complicate, be detrimental or enhance our simple ways of life.

Only mumu cultures believe that today. The reasons folks are taking up nationalists views are not farfetched. They pointed to the accommodation of piteous Christopher Columbus, lost on the seas and rescued by generous American Indians or the exploration and Baptism of Africa and Asia that turned them against their cultures and religions. You cannot overwhelm their culture with African language and manners, the way they overwhelm yours. If you were kindhearted, they are cunning.

Religious wars have turned many into terrorists. Indeed, religious days are numbered as their greed for power to dominate becomes obvious. Christianity and Islam captured the world by Crusade and Jihad. Some Africans cannot remember how they became Christians or Muslims. It could have been the eagerness to learn a different language, eat different food, culture or embrace a different God as Africans run from their own.

Enough Africans have come to realize that it has never been about religion that usually calls for empathy and tolerance, but economic domination of one another in the name of God used to bless the oppressed slaves into their graves. In return they were promised a handsome reward in 5, 10, 20 years into the future or better still, in heaven. There is no way, any religion can justify terror, slavery and votes for the conservative extremists in order to bring back "the good old days". Good old days for who?

As long as they reject immigration and glorify exploitation of the poor, they will elect politicians that share their views. They reminded us that politics is not a contest for a Pope or the Saints, it is for people that protect and love themselves first before others. If you want justice, go to heaven. Sprinkling tokenism, scholarship to private schools and healthcare outside the jungle like lottery winners while others pray to God to pick up their calls; are enough.