Unwilling slaves of China: A legacy of squander 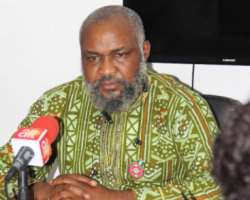 These three phrases sum up the sentiments that run through the minds of most critical thinkers of Nigerian origin who are unable to decipher or offer any logical explanation for why Nigeria is rated as a resource rich nation but doubles as home to the largest population of absolutely poor and dejected members of the human community.

Broadly speaking however, it is known that the reason for the unwelcomed paradox is because of the crass ineptitude of the political class that have through extensive manipulations of the electoral system, managed to hold on to political power since the last half a century after flag independence.

Professor Chinua Achebe’s summed up the above scenario of incompetent leadership that Nigeria has been cursed with almost in perpetuity.

“The trouble with Nigeria is simply a failure of leadership…The Nigerian problem is the unwillingness or inability of its leaders to rise to the responsibility, to the challenge of personal example which are the hallmarks of true leadership,” - Professor Chinua Achebe.

To underscore the debilitating leadership crisis that Nigeria is faced with, all that a person needs to do is to understudy the administrative style of the current president who was once a military dictator retired Major General Muhammadu Buhari.

Since he assumed office five years back, this president has rolled back Nigeria right into the inglorious class of a member of the world’s heavily indebted nation.

Nigeria has under president Buhari made a negative detour to become a notorious borrower to an extent that there is now hue and cry from all concerned patriots who are sounding loud note of warning that the current administration will lead Nigeria into an economically enslaved nation to the lenders such as China.

This sordid tale of an inglorious reversal of the gains made by the previous president Olusegun Obasanjo’s administration who led Nigeria out of the debts trap, need to worry every Nigerian because of the dimension that the addiction to borrow has become with president Buhari’s government and his aversions to public opinion which is of against the toxic move. But why make Nigerians the unwilling slaves of China through the ireational borrowing patterns? Did the Nigerian Customs Service not told us that in 2019 alone, it raked in N341 Trillion as revenues? Did the Federal Inland Revenue Services not claiming to raking in billions from taxes? Where are these money and why does government borrow so much and claims to be building national infrastructures which still remained collapsed? These conundrums are what every reasonable Nigeria is asking because it is a notorious fact that only few years back we exited from that disgraceful class of heavily indebted nations. From www.cgdev.org we are told the story of Nigeria’s freedom from debts as follows: “Nigeria, home to one in five Africans, has been the continent's most indebted nation."

"With $36 billion in external debt, 100 million people living on less than a dollar a day, and a fledgling democratic government attempting reforms, Nigeria should have been a strong candidate for debt relief. Yet, in part because of its oil revenues, Nigeria slipped through the cracks of debt relief programs. In 2004, CGD set out to provide analytical support to Nigeria's efforts to persuade creditors to agree to an appropriate debt relief package.”

In October 2005, Nigeria and the Paris Club announced a final agreement for debt relief worth $18 billion and an overall reduction of Nigeria's debt stock by $30 billion.

According to the authors, the deal was completed on April 21, 2006, when Nigeria made its final payment and its books were cleared of any Paris Club debt. CGD Fellow Todd Moss, who led CGD's work on Nigeria's debt, explains the outcome of the deal.

"This watershed deal was the result of months of tireless work by both Nigerian officials and the creditors.

The research platform known as CGD stated that it is proud that its work contributed to this historic outcome.

It says: "A September 2004 CGD working paper, Double-Standards, Debt Treatment, and World Bank Country Classification: The Case of Nigeria, argued for Nigeria's reclassification as an 'IDA-only' country within the Bank—a prerequisite for debt relief. This overdue change in status, announced in June 2005, enabled Paris Club negotiations to begin in earnest. CGD's work also influenced the structure of the final agreement, which included the first-ever discounted buyback within the Paris Club, an innovation first proposed in an April 2005 CGD note, Resolving Nigeria’s Debt Through a Discounted Buyback."

Also, it says that the Center's contribution to the deal has been recognized by participants in the negotiations, by others close to the process, and by major media:

"Your catalytic work and analysis made a difference…especially the work of CGD in facilitating the reclassification of Nigeria as an IDA-only country as well as putting forward an innovative solution to the debt problem." —Ngozi Okonjo-Iweala, Minister of Finance(as she then was).

"CGD has played a critically important role… I have it first hand from negotiators in the Paris Club that it was the CGD concept of a buyback that was the tipping point that led creditors to agree debt relief for Nigeria…This is a great achievement for all concerned, and is in no small part due to the work of CGD." —Ann Pettifor, co-founder Jubilee 2000 and Director of Advocacy International

CGD was described by the New York Times as "a nonpartisan research institution in Washington that proposed elements of the [Nigerian debt] deal" (Oct 21, 2005) and by the Economist as "the Washington think-tank that first proposed the buy-back" (October 20, 2005).

Nigeria's debt relief deal is historic. Although the short-term financial windfall will be modest, the real potential impact is for the future. The long-term challenge for Nigeria will be to consolidate the gains from the debt deal by pushing forward with economic reform and ensuring that the benefits from debt relief are shared with the population. This is by no means assured, but the debt deal is an important step in the right direction. These lofty aspirations have all evaporated due to poor economic management of the Muhammadu Buhari-led administration which sleeps, dreams and wakes up thinking of the next loan to apply for. Nigeria under this government has sleep walked back into the unfortunate class of heavily indebted nations and in five years, the government has accumulated what took successive governments in the past over two decades to build up.

The below story is why every Nigerian should worry.

The media is awash with the frightening moves By the government of Muhammadu Buhari to once more borrow heavily from China.

The Muhammadu Buhari-led Federal Government has offered a lame and irrational explanation why it decided to approach the China-Exim Bank for a $17bn loan request.

It said other lending institutions like the World Bank and the African Development Bank were not showing much interest when Nigeria approached them during recession.

The Minister of Finance, Zainab Ahmed, stated this in the Senate while defending the decision of the regime of the President, Major General Muhammadu Buhari (retd.), to borrow $29.96bn loan to fund critical infrastructure across the country.

She explained that the 8th National Assembly had approved about $6bn for the Federal Government out of the $29.96bn loan, leaving a balance of $22.8bn.

The Finance minister Ms. Ahmed told the Senate Committee on Local and Foreign loans that the Federal Government and some state governments were jointly requesting the loans from various lending institutions.

She said 70 per cent of the loan, which is about $17bn, would come from the China-Exim Bank while others would be sourced from other lending institutions such as the Islamic Development Bank.

The minister maintained that the country had no issue with its current debt profile but noted that its dwindling revenue could not fund the various projects that were expected to have meaningful impact on the lives of Nigerians.

She said, “The funds ($22.8bn) will be channeled to the funding of infrastructure, which will enhance the productivity of our economy.

“Other projects are in healthcare and education. It also includes projects for the rehabilitation of the North- East geopolitical zone, which has been ravaged by insurgency.

On why the country is seeking 70 per cent of the foreign loan from China, the minister said, “it is meant to make funds available to our own development institutions so that they can give out loans because access to finance has been difficult for the SMEs.”

On the debt profile of the country, the minister said, “The 2016 – 2018 external borrowing plans are both for the Federal Government and the states. So, some states would be responsible for the payment of some of the loans.”

On the sustainability of the nation’s debt portfolio, the minister said Nigeria’s current portfolio ceiling as set by the Fiscal Responsibility Act was 25 per cent of total debt to GDP. He said, “The ratio for December 2018 was 19.09 per cent but it reduced to 18.9 per cent by the middle of 2019.

“The debt service to revenue ratio is however high and it provides us strong justification for us to drive our revenue.

The minister said the nation’s debt level was low compared to other countries like the USA, the United Kingdom and Canada. The Chief of Staff to the Kaduna State Governor, Mohammed Abdullahi, defended the state’s $305m loan request before the panel.

A representative of the Katsina State Government, Yakubu Danja, said the state planned to source $100m out of $110m from the Islamic Development Bank.

He said the state would enjoy between 20 to 50 per cent grants and that projects to be executed would cover the entire local government areas of the state. He also said that the loan was interest-free.

Kogi State Government’s Commissioner for Finance, Budget and Planning, Mr. Ashiru Idris, said the $100m that the state was requesting would be used to develop infrastructure to encourage investors and diversify the economy. These are all propaganda that lack justification. Unfortunately, Nigeria now has a lamedock Senate and a Senate headed by a stooge of President Muhammadu Buhari so the Senators will okay the request because the Senate President Ahmed Lawan had already stayed that his Senate will pass every request from President Muhammadu Buhari because they are good. The Chairman of the committee seeking clarification on the loan package is a stooge of the Kaduna state governor whilst the Finance minister is the Sister of the Kaduna state governor. Nothing good can come from the Ahmed Lawan led Senate.

Just before we round up on the frightening development regarding the continuous pursuit for loans by president Buhari, let us read a little of what Oseloka H. Obaze, a seasoned diplomat, international civil servant, strategic policy advisor, wrote in 2016 about Buhari’s economic policy outlook.

Writing in his book “Prime witness charge and policy challenges in Buhari’s Nigeria”, he says: “Ten months into its first year in office, the Buhari presidency remains economically challenged. Its espoused economic policies have not manifested. As the economy wobbled towards a glaring and deleterious downturn, criticisms raged, compelling variants of ad-hoc policy approaches. Because most of the policy options were disconnected, they presented as policy dissonance, if not confusion.”

As Fela the legendary Musician would say, CONFUSION BREAK BONE AND WE HAVE DOUBLE WAHALA for dead body and the owner of the dead body.

Nigerians, must we allow ourselves to become slaves of China? The die is cast!