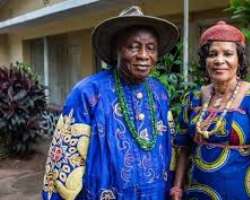 The Indigenous People of Biafra (IPOB) has told the Nigerian army that it should face the real security challenges confronting the country at the moment instead of stopping them from burying His Royal Majesty Eze Israel Okwu Kanu and his wife, parents of their leader, Nnamdi Kanu.

The group fighting for the actualisation of the sovereign state of Biafra insisted that the army would not stop it from conducting the burial ceremony of Kanu’s parents.

The burial has been fixed for February 14 2019.
Emma Powerful, Spokesman of the pro-Biafra group, in a statement, said that the army had abandoned its core duty of defending the nation and was now in Afaraukwu community in Umuahia, Abia State, harassing and intimidating the indigenes.

Powerful said they were notifying the world that preparations for the burial of Kanu’s parents was going ahead as planned, adding that nothing would stop it.

He said that the Nigerian Army was wasting its time and valuable resources trying to stop something they know they were incapable of stopping.

“Burial of the dead is a right older than man itself,” he said.

He wondered how the government of Nigeria can justify the deployment of soldiers to the venue of a funeral “while terrorists are busy making the lives of law abiding citizens a misery.”

According to IPOB, “What Buratai and his soldiers are doing in Umuahia is no different from what terrorists are doing in the North East.

“They invade peaceful communities, killing, pillaging, destroying and kidnapping people at will. We continue to draw the attention of the civilised world to the incessant harassment, humiliation, intimidation of Afaraukwu community in Umuahia-Ibeku by the very lazy and shameless Nigerian army, whose stock in trade is to terrorise innocent civilians.”

The Spokesperson said that the Nigerian government and its soldiers “are shameless and downright disgraceful and their refusal to confront armed Fulani insurgency and Boko Haram menace in the north, but instead chose to focus their attention on a burial ceremony in Afaraukwu is indicative of the misplaced priorities at the heart of this APC regime which has directly led to the deterioration of security situation across Nigeria.

“Boko Haram, Fulani herdsmen, Miyetti Allah Bandits, ISIS in West Africa, Al-Qaeda in the Mhagreb are dutifully waiting for Buratai and his warriors to engage them in battle in the north. That is the real security problem facing Nigeria, not the burial of His Royal Majesty Eze Israel Okwu Kanu and his wife.”

He said that come 14 February, the parents of the IPOB leader will be buried.