I am optimistic about Africa’s future — Bience Gawanas, Under Secretary-General and Special Adviser on Africa 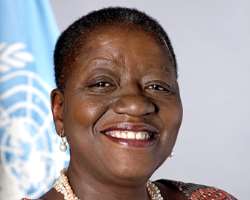 The Office of the Special Adviser on Africa (OSAA) was established in 2003 to enhance international support for Africa’s development and security through its advocacy and analytical work, and to assist the UN Secretary-General in improving coherence and coordination of the UN system’s support to Africa. Ms. Bience Gawanas was appointed Under-Secretary-General and Special Adviser on Africa last year. She sat down with Africa Renewal’s Zipporah Musau to discuss her role and her priorities for 2020. Excerpts:

Africa Renewal: As the Special Adviser on Africa to the UN Secretary-General, what is your role?

Bience Gawanas: I see myself as the voice of Africa within the UN. My office, the Office of the Special Adviser on Africa, assists the Secretary-General in bringing greater coherence to the UN’s support to Africa’s development. We also support the New Partnership for Africa’s Development (NEPAD) programme, which is now transitioning to the African Union Development Agency (AUDA).

What would you say are the three biggest challenges facing Africa today?

I would rather talk about the opportunities in Africa. I want to create a positive narrative of Africa. However, we know that we still face challenges of conflicts, disease, poverty and hunger. That is why we must implement the Sustainable Development Goals (SDGs) and Africa’s Agenda 2063 (the AU’s blueprint and master plan for transforming Africa).

What are the top three opportunities you see on the continent for 2020?

There are various opportunities that can put Africa on a very different path. For me the greatest opportunity right now is the African Continental Free Trade Area (AfCFTA) that came into effect a few months ago. Africa has the potential to be one of the biggest markets in the world. But we need to trade amongst ourselves as Africans.

Another area of opportunity for me is climate change. For the first time more people are getting involved and discussing climate change like never before. The reality is with us. The UN Climate Action Summit convened by the Secretary-General last September saw many countries join the climate action agenda. Young people across the African continent are saying, “The future is ours.”

As you mentioned, the campaign to end conflicts in Africa kicks off in early January 2020, and it is also the theme of the African Union for the year. What is it about, and what is the UN’s role in it?

I see it in two ways: one is the physical dropping of the guns and the other one is focusing on development, investing in our people. We have come a long way and have managed to silence the guns in many countries in Africa already, but there are still some remaining hot spots. I think we can get there. It is an opportunity to have youth and women as agents of change, not just as victims or as perpetrators of conflicts or wars. We have always been talking about child soldiers, about youth taking up arms. But there is a new narrative—that youth also want to be known as agents of peace, and therefore should be involved in the peace process on the continent.

The objective of the campaign is to ask, “What more do we need to do in order to achieve a complete silencing of guns in Africa?” The AU will be rolling out different activities to accelerate the achievement of that. At the UN, the Secretary-General has established a task force, which OSAA is part of, led by the UN Assistant Secretary-General for Africa, in the Departments of Political and Peacebuilding Affairs and Peace Operations, Bintou Keita, to support the AU on the initiative.

A few months ago, the Africa Continental Free Trade Area came into effect. How will it benefit the continent?

First, by removing trade barriers for African products. There will be a higher flow of goods and services across our borders and a strengthening of our capacities to trade. There will be manufacturing industries, with greater emphasis on value addition, and economies of scale because Africa is a huge market. Jobs will be created. I also see it as an opportunity for small and medium-size enterprises, for women traders and not just the big businesses. This is the best thing that could ever happen to Africa.

What are your three top priorities as special adviser on Africa?

I was appointed to this office a year ago when the UN was going through major reforms in the peace and security pillar, development pillar, as well as in management. At the same time, the AU was also going through institutional reforms. So it is quite obvious that we had to reposition ourselves. My priority is to make sure that the office remains relevant, effective, efficient and impactful in our role and mandate. I am the first woman to occupy the position of special adviser on Africa, I see myself as a groundbreaker in the UN system, and therefore I must ensure that the concerns of women and youth are also my priorities.

What programmes will you prioritize in 2020?

We are mostly guided by what the African continent sees as its priorities, the synergy between the two agendas—the AU’s Agenda 2063 and the global Agenda 2030. The AU and the UN have signed two framework agreements: on partnership on peace and security and on partnership in implementation of the two agendas. Those will definitely remain priorities for us.

We will also publicize what the AU and member states are doing, that’s why the Africa Dialogue Series in May remains a very important platform for us. For example, this year the AU’s theme was “Towards Durable Solutions for Forcibly Displaced Persons in Africa,” and by focusing on it during the Africa Dialogue Series, we definitely put it on the UN agenda. That is why this year there were several discussions on that topic at the UN, including in the Security Council and elsewhere. We hope to achieve the same success with the “Silencing the Guns” theme in 2020.

What is it like to be an African female leader on the global stage?

I am very fortunate. I always look back to when, as a young woman, I was at the forefront of fighting for Namibia’s independence. I tell myself if we could fight for independence, surely we can also lead. This never was really an issue for me because I served my country in many positions as the first woman to do so. I moved from Namibia to the continental level, where I served as one of the first female commissioners in the AU Commission. Now I am here at the global level. It is really a privilege.

Are there any setbacks?
The challenge women face is the same everywhere when getting into a male-dominated structure that never had women before. We have to basically rewrite the script and start with a new narrative that takes into account who we are as women. I’ve always said that the fact that women occupy leadership positions does not turn them into men. I bring my qualities and perspective as a woman to enrich the workplace. We should always be objective. I tell women, when you move up the ladder, don’t kick off the ladder. Hold on to that ladder so that other women can climb the same way you did.

What role can women in Africa play towards a better continent?

We should be asking what role women are already playing and what role they have played in the past. We would not be here without the contribution of women, that is for sure. What is it that women want for Africa? We want a world that recognises everyone first and foremost as a human being. I believe that by asking the right questions and making our contributions in the different fields that we occupy, we are creating a different society. We have come a long way. The resilience and strength of African women will make a difference.

Africa is the world’s youngest continent, with more than 70% of its population being below 35 years of age. What advice are you giving the Secretary-General on Africa’s youth?

The first advice is that we must listen to what the African youth are saying. What do they want, and what are their hopes and aspirations for the continent? Dialogue with them and create many opportunities to engage them. One young person once told us at an event: “If you want to accelerate action, give it to young people because we run fast.” It is also important to talk about peace and stability vis-à-vis development and prosperity. Youth are saying, “Invest in us—invest in our hopes and aspirations, in our innovations and in what we can contribute. Don’t see us as the future leaders, see us as leaders today.” We need jobs because unhappy youth, youth without hope, will not help us to silence the guns in Africa.

What are your top three good news stories about Africa in 2019?

Obviously, the Eritrea-Ethiopia peace agreement that led to Ethiopia’s prime minister, Abiy Ahmed, receiving the Nobel Peace Prize this year. Also the peace efforts in the Central African Republic, South Sudan, and Sudan. The Nobel Peace Prize was really a vote of confidence in Africa’s ability to resolve conflicts within itself. But I also love how we excelled in sports and culture—South Africa’s Springboks team won the Rugby World Cup and Eliud Kipchoge of Kenya broke the two-hour marathon barrier. These are the good stories I want to tell.

What are you looking forward to in 2020?
Bringing to fruition some of the programmes and plans that we developed. Repositioning OSAA, working closely with our member states and making a difference. To continue being an advocate for Africa’s development, peace and security agenda. I look forward to having a successful Africa Dialogue Series in May 2020. I am optimistic.