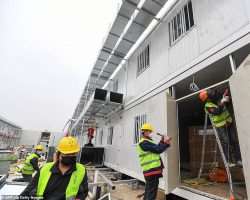 An emergency hospital that was constructed in seven days for the treatment of coronavirus patients in China has been completed.

Engineers from across the country were reportedly brought in to help speed up construction.

About 4,000 people reportedly worked day and night to build the hospital in seven days. China's army has reportedly been given control of the hospital.

Some 1,400 military medics have been brought in from the People's Liberation Army to the new hospital, dubbed 'Fire God Mountain', according to state media.Coronavirus has become a world problem that must be solved by all people where countries should actively look for ways that the disease does not spread into their enclave.