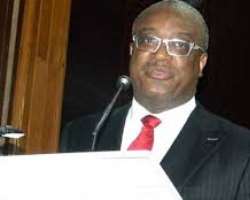 The Nigeria press and judiciary have been told to do more for the country even as they have been scored high.

Alegeh who spoke on the topic: “Judiciary and Journalism As Frontiers of Democracy: Anachronistic or Contemporary in Justice and Fairness?”, said the Independent National Electoral Commission (INEC), has prevented the press from announcing election results due to its powers.

"INEC has prevented the media from giving election results because it has power. If the press announce the results of election to favour one person and INEC announces another, there will be problem".

According to him, the press is so powerful that the policeman who would have done something that is not right would know that there's someone somewhere that is beaming searchlight on him.

"Unfortunately also, they have come into conflict with each other. Our whole democracy have been supported by the press and judiciary".

He lamented however that in their bid to silent the press, state governments decided to operate their own state media houses.

"Some persons are wanting to take control of both the press and the judiciary. You can see that some governments try to own radio and TV stations to discound information.

"We need to look at how our press is organized", he stressed.

On the need for the judiciary to be free to discharge their duties without fear or favour, the legal luminary advocated for a change in the system.

Hear him: "For the judiciary to do their work, there need to be a change in the system. The image of the judiciary has been battered.

"The judiciary has good men and women, but it will be impossible for us to say that there's no bad egg. Let us take the Kenya style.

"In Kenya what they did was to introduce a lifestyle Audit and ombudsman. Until we start to look at a more productive way, we will not be able to go far.

"Why are we not using deployed technology that have worked in South Africa and Kenya?