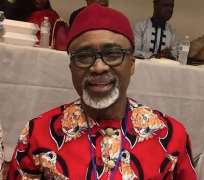 Following the call by a former Minister of Aviation, Osita Chidoka, to replace their social media profile pictures with that of Sen. Enyinnaya Abaribe's in solidarity to his call for resignation of President Mohammadu Buhari Nigerians have overwhelmingly heeded

Chidoka had on Thursday urged his friends on social media and other Nigerians to use Abaribe's face as their display pictures as a means of showing their agreement with the senator who said Buhari should resign because Nigeria security has failed.

Chidoka said, in support of Sen. Abaribe’s strong voice as Leader of Opposition in the Senate, I ask those who agree to change their profile picture to his picture for 24 hours #AbaribeSpeak #NewProfilePic"

Soon after the former minister made the call, Facebook, Twitter, Instagram and other social media handles were awash with the picture of Senator Enyinna Abaribe’s as their profile pictures.

Chidoka called on Nigerians who loved what Abaribe did, to do same for 24 hours.

"We voted the government of APC in 2015 and re-elected them in 2019 because they told us they have the key to security.

Abaribe continued, today, the APC government has failed because people are being killed anyhow, if you want to deal with a matter, you first go to the head.

“We can go to the APC government and ask this government to resign. “And we want to tell the government that if it does not resign, we shall have no option than to go with stones to pursue it.”