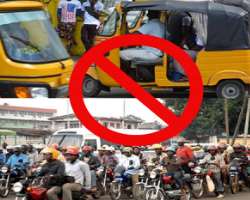 Some commercial motorcycle operators on Friday took to the street to express their grievances over the recent decision of the state government to restrict their movement in some Local Government Areas, bridges, and highways in the state.

The operators which include majorly that of Gokada, Max.ng staged and 1st Ride companies, on Friday staged a peaceful protest against the recent ban of their operations in parts of Lagos State.

Bearing various placards, the protesters appealed to the state government to regulate their services and not restrict them from operating.

They lamented that the business is their only means of survival.

recall that the Commissioner for Information and Strategy, Gbenga Omotoso, announced earlier this week that the government would enforce the ban on motorcycles and tricycles in six local government areas, as well as major highways and bridges from February 1.

He explained that the decision was taken after a robust assessment of the debate on the rate of accidents in Lagos, saying security and safety of the lives of the residents were paramount.

He also warned that all offenders and violators would be dealt with in accordance with the laws of the state.

The operators, who protested from Ojota area to the Lagos State House of Assembly, Ikeja, called on the state government to regulate their operations rather than ban them.

Mr Steve Orajiaku of 1st Ride company, told newsmen that the state government did not consult with the operators before taking the decision.

“We are not happy with the way the ban was done. We believe we are running a democratic government where a decision of this sort, very crucial to the lives of people, irrespective of whatever the reason is, is about to be taken, and the stakeholders were ignored. It is unfair”.

“We are here to say that the decision that Lagos State Government has taken should be suspended for now, we are pleading. What we are here for is not to cause any mayhem, it is not to also insult your personality, we are here because we are law-abiding citizens,” Orajiaku said.

He said that the operators were aware of government's concern about security and lives of people.

According to him, the operators are educated and professionals, and have been riding the motorcycles without accidents.

Uche Ekemiri from Gokada, said the operators had obeyed the government's law by upgrading their bikes, and had undergone intensive training to ensure their capabilities of taking the job.

“Our bikes have tracking devices and camera. We went for blood and eye tests. Government should call us and see the possibility of regulating us. We pay tax to government, and we are ready to have license; government just woke up one day and banned us. I don't see reasons they should ban us. This is what we do for a living,” Ekemiri said.

A female operator, Sandra Ebina of Gokada, said the proceeds from riding commercial motorcycles had helped her to further her education.

Ebina appealed to the state government to have a rethink on the ban, as it would affect her livelihood and those of other riders.

She said:“I am an accountant; I finished my OND from YabaTech. This is the job I do to train myself in school. If I leave this job, there is nothing else for me to do.

“Government should regulate us and not ban us. We are professionals. This is what we do to feed our families. Where do we go from here?”

Yusuf urged them to abide by the new ban, pending when the state government would decide on their requests.

“Protest is an ingredient of democracy. We commend you for the peaceful demonstration. We will go through your petition. However, we urge you to keep cool and keep to the law, until we call you back. Government has made pronouncement on the issue. Don't allow anybody to hijack the protest because you will be held responsible for it”.

“Very soon, we will call you. Maintain the law. It is when the government sees your conduct that they will know what to do,” he said. (NAN)