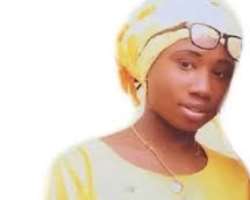 Leah Sharibu was abducted and taken into Boko Haram captivity well over a year ago with her abductors refusing to release her into liberty. She became world famous when she said that she won’t renounce her Christian faith and would prefer to die for it rather than being forced to be converted into Islam.

Her religious conviction endeared her greatly to the rest of the world as the cry for freedom which she encapsulates resonated greatly with them. Many celebrities from all over the globe took up her cause with the social media handles buzzing with her belief but tragically that didn’t lead to her release and we are yet to know if she is even dead or alive.

There have been conflicting reports of her current whereabouts. Some have opined that she was killed while some said that she is still alive. A recent report by Sahara Reporters said that she had recently been delivered of a baby boy who she had for one of the top commanders of the dreaded boko haram after being forcefully made to convert to Islam.

One is at a loss on whom to believe with the plethora of fake news flying all around the place. There is hardly any fact checking done for the news among most of the Nigerian media houses and so most times the news consumers are at the mercy of the news purveyors.

Her parents have been crying day and night that all what they want is for their daughter to be brought back alive and it didn’t really matter if she had a child or not. One can feel deeply the anguish of her parents and their plight in not being able to communicate with their offspring for a long stretch of time.

The government has also not been pro active in getting her released as there has been a conspiratorial silence on their part. It seems that her life and well being doesn’t matter much to them as she isn’t a member of the elite or ruling class. It is an open secret that there are two classes of Nigerians who live in the nation – the elites and the rest of us who are worse than second class citizens.

We recall that one northern elite’s daughter had an issue with hard drugs being found in her possession in Saudi Arabia when she went for the lesser hajj. The Federal Government swung immediately into action when it was learnt that her father lobbied Buhari directly on her behalf and she was released. She was saved from the executioner’s sword because of her highly privileged background. Her fate will have been worse if she has been a Plebian. When last has any government official commented on the Sharibu case? The one year anniversary of her abduction went largely unnoticed with her parents being left to mourn alone.

In sane societies, the government would have done everything humanly possible to effect her release – drones would have been deployed and if push came to shove would have negotiated with the sect to ensure that she is returned hale and hearty to her beleaguered parents. Alas we live in a nation that has been turned into a haven worse than a banana republic.

Our celebrities should step in where the government has failed and use their star power to draw global attention to her cause and keep her in the minds of millions all over the planet earth. She has the right to freedom of religion and is one of the enshrined rights in the 1999 constitution and several human rights charters all over the world. That right which is inalienable shouldn’t be denied to her and this should be the nexus binding human rights activists together.

Sharibu is a heroine as she chose her freedom to worship her creator in her own way rather than agree to be ‘free’ and suppress something which is fundamental to her existence and well being. It is tragic that not many religious houses especially the Christian ones have done much to celebrate her and mount pressure for her immediate release.

She was still in the secondary or high school when she was abducted and she has lost so much ground there as some of her mates will be in the university now. The insurgents have no respect for western education and the rights of the girl child. They view women as mere sexual objects or chattels to be used solely for procreation or to be sold and bought as merchandise.

We make a loud call on the Federal Government to do the needful in getting her released from captivity and for influencers in whatever walk of life to lend their voices for her release as she deserves freedom.

Little drops of water make the mighty ocean and this should apply to our collective efforts in making her taste uhuru once more.

She is a huge symbol for freedom and it is imperative that we immortalize her ideals; hopefully she will still come out alive and we will celebrate the triumph of light over darkness.