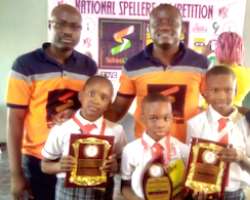 A Non-Governmental Organisation (NGO), Schoolinks Partners has targeted to organize Spelling Bee Competition for about 200 schools across the country in 2020.

The Director of the Foundation, Mr Ifeanyichukwu Okonji stated this at the Spelling Bee Competition organized for primary school pupils at Royal Mira All Saint International Schools, Asaba, the Delta State capital.

The foundation also used the occasion to embark on free medical check-up for parents, saying that when parents are alive, the child have access to education.

Okonji said that National spelling bee was to build leadership mindset on the children and to make them praticalize what they are taught in class.

He said, "What we are doing here today, is what we have done in other schools in the National Spelling Bee to build the mindset of these children. They have learnt so much in the class but they hardly stand in the crowd.

"We started it last year, we have organized the spelling bee competition in primary school in Anambra, Ebonyi, Bayalsa states and what we did was to pay a percentage of their school fees but this year, we are starting in Asaba, Delta state and we are targeting about 200 schools. We have various prizes and also technology instructor as a gift presented to them".

In his remarks, the Director of the school, Mr Moses Iduh, who applauded the kind gesture of the organizer, said that the spelling bee competition would help the pupils in their academic pursuit.

"If you go to some high offices nowadays, most of the workers cannot even spell words, check their memo, sentences and others. Though, the education value in Nigeria is gang down, I believed with this spelling bee, the narrative will change" he stressed.

Iduh added that there should be a monitory team to oversee teacher's performance and what they offer to the children in the schools.

The pupils who demonstrated their academic prowess in dictation to spell difficult long and short words with little Victor Okenwa clinched the first position while Ifeanyi Okolie and Bethel Ikechukwu came second and third positions respectively.