Eedc  and  castration Of   Life And  economic  activities In The  south East , An Igbo  group   Organizes   Massive  demonstration While  calling  for  breakage Of  the  monopoly. 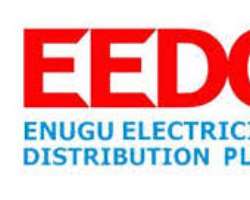 An Igbo group Voice from the East-VEAST, has called for outright ban of Enugu Electricity Distribution Company -EEDC for what it called calous and gross abuse of power in its services to the Zone.

It is necessary to observe that EEDC has positioned itself as the black sheep of service distribution in the East , notes VEAST. In an address to journalists at Enugu, the Convener of VEAST Comrade Kindness Jonah, notes that nothing but catastrophy could be used to describe the services of EEDC to the people of the South East, submitting further that unless EEDC was disbanded, the abysmal performance of the company cannot improve, adding that monopoly breeds autocracy and disservice anywhere. Of late , the generality of the people of the Zone have used one voice to call for the disbanning of EEDC to make way for competition and efficiency.

This is the focus of the communique signed by groups of civil society in the South East , calling for disbanning of EEDC. According to them : EEDC places people on estimated bill for rip off unjustifiably, EEDC forcefully removes old meter paid for by users and forces them to buy new one and yet, carries the former one in a shear brigandage, EEDC charges the highest rate of electricity consumption in the Federation , yet there is no show of good service to the people. Therefore , there is a clarion call for the disbanning of EEDC and breakage of its monopoly in the South East in a communique endorsed by :