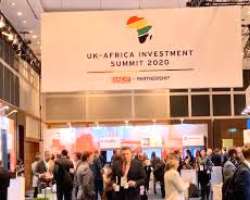 The UK-Africa Investment Summit on 20 January 2020 laid the foundations for new partnerships between the UK and African nations based on trade, investment, shared values and mutual interest. Billions of pounds of new commercial deals were announced highlighting the strength of the UK’s offer and existing relationship with Africa. The UK also announced new initiatives and funding which will: strengthen the joint trading relationship, support African countries in their ambition to transform their economies, launch a major new partnership with the city of London, turbo-charge infrastructure financing, and enable Africa’s clean energy potential. Taken together, this will help to realise the UK’s ambition to be the investment partner of choice for Africa, create hundreds of thousands of jobs and ensure the mutual prosperity of all our nations.

2. Businesses highlighted Africa’s huge economic potential. Leaders were clear that Africa’s success is necessary for a secure and prosperous world. The Summit heard about the extraordinary dynamism and innovation coming from African firms: 8 of the 15 fastest growing economies are expected to be in Africa, and by 2050 over 1 in 4 global consumers will be African. The Summit demonstrated the breadth of opportunities for new investment and business partnerships.

3. The UK set out its ambition to increase trade and investment links with Africa. This means building a stronger, long-term relationship with African countries – based on trade, investment, shared values and mutual interest. The UK wants to be the investment partner of choice for Africa and will continue to support African countries in their ambition to transform their economies. The UK launched a new partnership between Africa and the City of London to generate sustainable finance and harness the UK’s world-leading financial expertise.

4. The UK, African Governments and partners launched a package of new initiatives, funding, commercial deals and partnerships to deliver this ambition, and: