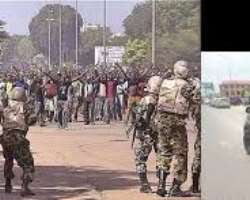 Onitsha, Eastern Nigeria, 19th Jan 2020-The Int’l Society for Civil Liberties & Rule of Law, a leading research and investigative rights and democracy group in Nigeria since 2008, has updated its special research report on Military Massacre in Eastern Nigeria, perpetrated between August 2015 and Sept 2017. The research report was released in Jan 2019 after three years of in-depth research and investigation conducted by Emeka Umeagbalasi and his research assistants. Umeagbalasi is a grassroots rights and democracy campaigner in Nigeria since 1995. He is also a criminologist and graduate of security studies and holds a Master of Science degree in peace studies and conflict resolution.

The special research investigation leading to the report was conducted and concluded without a dime from any int’l grant institution; and launched following reported cases of mass killings and related state atrocities in Eastern Nigeria by the country’s security forces spearheaded by the Nigerian Army and the Nigeria Police Force. The state atrocities or grisly crimes against humanity (perpetrated under situation of no war or armed conflict) were perpetrated against unarmed and defenseless citizens of Eastern Nigeria, targeting members of the Judeo-Christian Igbo Ethnic Nationality and their neighbors. The massacre was remotely perpetrated following unhidden policy of ‘structural, physical and cultural violence’ directly and indirectly promoted and executed by the Government of the day in Nigeria.

The Nigerian Military atrocities included ‘industrial scale’ killing and maiming of street protesters and those in places of work, sleep or rest and leisure, church service, meeting, movement and residence, etc. There were also several reported cases of unlawful arrest and abduction or disappearances of unarmed and defenseless citizens both ‘the dead and the living’; sexual harassment, torture and other inhuman treatments or punishments as well as long detention without trial and trumped-up charges. The entire old Eastern Nigeria has also remained under military and police siege since August 2015.

Accompanying the military massacre was large-scale disruption and militarization of general economic activities in Eastern Nigeria particularly in the Southeast Region, leading to direct and indirect loss of about N901b or $2.9b since August 2015. The military massacre in Eastern Nigeria also promoted citizen militancy and gun culture; with high rise in street crimes, youth militancy, access to illicit arms and other social vices including street and roadway touting and violence.

The present central Government of Nigeria also acted wickedly and attempted to escape international damnation and justice responsibility by hurriedly tagging the main victim group (IPOB) a “terrorist organization”. Despite graphic details of the massacre and local and international outcries including several calls on the Government to act particularly in accordance with the Constitution and other laws of Nigeria and the int’l law principle of ‘complementarity and no impunity’ by fishing out the perpetrators and bringing them to justice; the Government refused to do so till date.

‘Service’ roadway and custody corruption also skyrocketed in Eastern Nigeria following the military massacre; with the two regions (old East) emerging as ‘the country’s capital of police and military corruption’. Officers of the Northern Muslim extraction and others including those of the Southwest also had a field day and turned the two regions into ‘arenas for hate, religious, ethnic and corrupt policing and soldiering’. In the end, no fewer than 480 defenseless citizens were massacred and over 500 shot and wounded with scores crippled for life. No single soldier was killed throughout the military massacre particularly during the street protests.

At the release of the special research report in Jan 2019, it was 95 pages and the 62-page victims’ album. After its recent update done this Jan 2020, the report increased to 122 pages following addition of the post massacre state atrocities and more names of the victims. Contents of the updated special report include: about Intersociety, short profiles of the Nigeria military and the police, research methodology, executive summary; international, regional and local (constitution and ors) legal frameworks, etc. The Legal Frameworks covered human rights and humanitarian laws including laws guiding armed conflict (war crimes) and non armed conflict (crimes against humanity) environments and policing techniques or handling styles used in policing ‘peaceful’ and ‘non peaceful’ assemblies under the UN System.

Contained in the special report, too, are graphic statistics exposing the killings and maiming including their patterns and trends; disappearances, unlawful arrests, torture and other inhuman treatments or punishments; sexual harassment, long detention without trial and trumped up charges; police and military roadway corruption, lopsided composition of key policing and military formations and their personnel and general disruption of economic activities, etc. The updated report also contained names and profiles of 38 perpetrators who directly or indirectly participated in the massacre and its aftermath as well as 26 recommendations for purpose of ensuring justice and deterrence.

The special research report is the most comprehensive indigenous human rights abuse report in Nigeria since 2015. It is also the most graphically detailed database of the state actor rights abuses or violations in Eastern Nigeria in recent decades and likened to the Massacre of Ndigbo in 1966: Report of the Justice G.C.M. Onyiuke Tribunal {Tollbrook Limited, Ikeja, Lagos)” which found that…between 45,000 and 50,000 civilians of former Eastern Nigeria were killed in Northern Nigeria and other parts of Nigeria from 29th May 1966 to December 1967 and not less than 1,627,743 Easterners fled back to Eastern Nigeria as a result of the 1966 pogrom”

The special research report had further provided a framework for civil litigations in US Courts and criminal lodgments before the ICC; all in matters of perpetration of crimes against humanity, etc. A number of defenseless Nigerians fleeing the State’s false and vindictive terror tag and persecution including those who lost their spouses and other relatives in the massacre, had cited the report in their asylum cases in overseas and won same.

As a matter of law and criminology, when a crime is committed or perpetrated, but not investigated and documented, then no crime is committed or perpetrated’. But when perpetrated and investigated and documented, the investigator has left a message of indelible and undeletable record for generations to come. Crime is also not statute bared; as a serving Chief of Army Staff since July 2015 will certainly one day become ‘a former Chief of Army Staff’

We hereby urge all citizens or nationals of good conscience and humanism in Nigeria and beyond to study and analyze the special report and make maximum use of same in their various ways particularly as it concerns justice for the citizen and the group victims, punishment for the perpetrators and deterrence against future occurrence as well as first and repeat-offenders. The attention of the Southeast and the South-south public office holders and policy makers is also drawn and urged to do the needful.

The Special Research Report is already up and running on our website: www.intersociety-ng.org . It is permanently and conspicuously located on the site and titled: the military massacre in Eastern Nigeria (August 2015-Sept 2017): updated in Jan 2020. With this update, the first version is stood down and replaced or substituted with the updated version. Our supporters, friends and others across the world are urged to take note. The updated copy is also attached below. Also see: http://www.intersociety-ng.org/phocadownload/2019/under%20buhari%20and%20osinbajo%20updated%20new.pdf