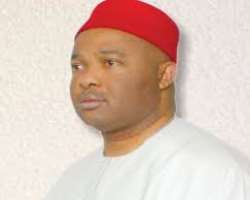 His Excellency, Gov. Hope Uzodinma, a prophetic manifestation of Fr Mbaka's prophecy and a beneficiary of controversial Supreme Court judgement has come under barrage of allegations from the publisher of Pointblanknews.com, Mr Jackson Ude, a North American based journalist. In series of tweets on his twitter handle, Jackson Ude alleged that he personally investigated Uzodinma's claim of having obtained a Washington University Certificate. His investigation revealed that the School do not have educational accreditation by any accreditation body in the U.S. According to him, after he exposed the racket in 2012, Hope Uzodinma quickly deleted his academic records from his profile. "Till date, he is yet to make his academic record public. I don’t even know what he used on his INEC form!" Jackson tweeted. (http://pointblanknews.com/pbn/exclusive/senator-uzodinma-not-our-graduate-says-washington-university/ ) "Hope Uzodinma who forged a university certificate and the university disowned him is now Governor of Imo state, a state that parades one of the most educated people in Nigeria! Worst is, they are celebrating the fraud!" Further tweet from Jackson Ude accused Gov. Hope Uzodinma of defrauding Nigeria Ports Authority of $12 million which case he claim is still under investigation by the the government. "HOPELESS UZOADIGHINMA: THE FACE OF A FRAUD! Collected $12million from Nigerian Port Authority for the dredging of Calabar Channel, NEVER did the job. Got arrested, claimed HBP, was granted bail. Case on. Issued a N200million dud check, case still with EFCC. Ndi Imo, how far?"

Jackson Ude did not stop at his avowal on Uzodinma but descended on Fr Mbaka whose viral prophecy on Hope Uzodinma became a subject of public discourse. "Fake Prophet Mbaka says “I have 39 more prophesies that will come to pass in 2020. I have 40 on New Year’s Eve but only Uzodinma’s went viral.” Me: Mbaka’s audience are mostly illiterates, religious buffoons who can’t think and make independent judgement".