Court 'sacking' Of Ifeanyi Ubah Is A Travesty Of Justice- Says Huriwa:

MAY PETITION NJC TO SANCTION THE JUDGE:
By Human Rights Writers Association Of Nigeria (HURIWA) 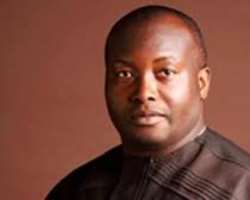 The decision of the Abuja High Court sitting in the Bwari area Council which purportedly 'sacked' Senator Ifeanyi Ubah of the Young Progressives Party (YPP) has been described as the greatest disservice to the Principle of Rule of law and a massive travesty of justice given the fact that the Court overreached itself and made an order that is substantially dubious and unsustainable because the person being asked to be sworn was never in the ballot paper.

A frontline Civil Rights Advocacy group- HUMAN RIGHTS WRITERS ASSOCIATION OF NIGERIA (HURIWA) which reacted to the ruling stated that the Abuja High Court has increased the credibility crises tearing the nation's judiciary apart because it has just awarded the Senate seat of an election to a claimant that was never in the ballots just as the Rights group said it will approach the National Judicial Council to ask for severe sanctions for the presiding judge Mr. Bello Kawu for bringing the nation's judicial system into disrepute.

HURIWA recalled that the court, in a ruling by Justice Bello Kawu, nullified Ubah’s election, for allegedly using a forged National Examination Council (NECO) certificate to contest the senatorial election that was held in the state on February 23, 2019 just as the judge had on April 11, 2019, ordered that the Independent National Electoral Commission (INEC), to withdraw the Certificate of Return it issued to Ubah and issue a fresh one to Obinna Uzoh of the Peoples Democratic Party (PDP), who came second in the poll.Ubah polled a total of 87, 081 votes to emerge, winner of the Anambra South Senatorial District . Senator Ubah then approached the same court to ask for a review since there was a manifest display of unfairness but the Court restated her earlier ruling.

Ubah said he was neither served with the court processes nor hearing notice with respect to the suit before the court proceeded to deliver the judgment against him.

HURIWA recalled that Following his application for a stay of execution, Justice Kawu, on December 4, restrained the Senate president from swearing-in Uzoh, pending the hearing and determination of the motion challenging the verdict just as the court equally ordered all the parties, including the INEC to maintain the status quo until it decides the merit in Ubah’s contention.

However, the judge has just held that Ubah’s application to vacate its judgment lacked merit and accordingly dismissed it just as he also dismissed a motion another claimant to the PDP senatorial ticket, Chief Chris Uba, filed to be joined as an interested party in the substantive suit marked CV/3044/2018, which was filed before the court by an electorate in the state, Anani Chuka.

HURIWA said the judgment is a travesty of justice just as the Rights group said in a statement by the National Coordinator Comrade Emmanuel Onwubiko and the National Media Affairs Director Miss Zainab Yusuf said that on good authority we can state that the ruling is irregular and all the legal wrongs in the above suit are hereby enumerated as follows: LACK OF TERRITORIAL JURISDICTION. The Federal Capital Territory High Court lacks territorial jurisdiction to hear the Young Progressive Party primary election that took place at Nnewi in Anambra state for the nomination of the party’s candidate for the Anambra South Senatorial District at the National Assembly. See the case of MAILANTARKIvs. TONGO (2018) 6 NWLR PT. 1614 page 69 where the supreme court held thus at Pg. 86 para C-D. “A court in one state of the federation does not have jurisdiction to hear and determine a matter either exclusively within the jurisdiction of another state or which arose within the territory of another state. No court in any state, including the High Court of FCT has extra territorial jurisdiction. See. Rivers state government of Nigeria vs. Special Konsult (Swedish Group) (2005) 7 NWLR (Pt 923) Page 145 referred to.” b. At page 89-90 in the case of MAILANTARKI vs. TONGO (2018) 6 NWLR PT. 1614 page 69, the supreme court further held as follows:“A court in one state does not have jurisdiction to hear and determine a matter which is within the exclusive jurisdiction of another state. The territorial jurisdiction of the High court of federal capital territory is restricted and confined to causes and matters that arose within the Federal Capital Territory. There can be no justification for the institution of a suit before the high court of the FCT in Abuja on a matter that occurred outside the Federal Capital Territory. The filing of such suit would be a clear example of “forum shopping” in the hope of securing a favorable outcome. Such a practice had been seriously deprecated. Such practice does not promote the administration of justice. It is also an unethical practice on the part of the Legal Practitioner who filed the suit. In the instant case, the appellant, having instituted his suit at the High Court of Federal Capital Territory Abuja, a court which was not in the jurisdiction where the cause of action arose, involved in forum shopping which amounted to abuse of judicial process.”a) By virtue of section 87(9) of the Electoral Act 2010 (as amended), it is only an spirant to this Primary Election of his/her Political Party who can complain that any of the provisions of the Electoral Act and the guidelines of the Political Party has not been compiled with in the selection or nomination of a candidate of the Political Party for election. Section 87(9) of the Electoral Act 2010 (as amended) is available to a dissatisfied aspirant who participates in his party primaries. It confers jurisdiction on the Court to hear the complaint from a candidate who participated at his Party’s Primaries can question the conduct of the primaries. No other person, whether within the Political Party or outside of it can ventilate his grievance arising from party nomination as there is no law backing him up.The above position and principle of the law is in accordance with the Supreme Court decisions in the following cases; AL-HASSAN vs. ISHAKU [2016] 10 NWLR (Pt. 1520) Pg. 320P.D.P vs. SYLVA [2012] 13 NNWLR (Pt. 1316) Pg. 85 DANIEL vs. INEC [2015] 9 NWLR (Pt. 1463) Pg. 113;EMEKA vs. OKADIGBO [2012] 18 NWLR (Pt. 1331) Pg. 55; OMBUGADU vs. C.P.C. [2013] 3 NWLR (Pt. 1340) Pg. 31 HURIWA stated that the Court was wrong and had no jurisdiction to join Dr. Obinna Uzo who was not an aspirant and a member of Peoples Democratic Party in a Pre-Election dispute that bordered on the nomination of the candidate of the Young Progressive Party. In the case of IGWEMMA vs. OBIDIGWE & 2 ORS [2019] 16 NWLR (Pt. 1697) Pg. 117 at Page 140 paras E-H, the Supreme Court held thus:-“A person who did not partake in the primary as a candidate or aspirant cannot invoke section 87(9) of the Electoral Act (as amended) to institute a case in court. In otherwords, a party who did not partake in the primaries as an aspirant has no locus standi to invoke the jurisdiction of the high court in the circumstances.”

HURIWA said it has already put machinery in motion to petition the National Judicial Council so these monumental display of judicial rascality and professional incompetence by the judge is sufficiently addressed.