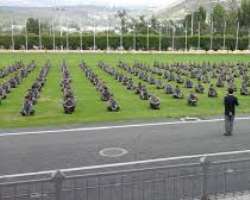 The movie Wag the Dog was released a generation ago, one month before a presidential scandal which invited comparisons between that film and the reality of that time. Now, 23 years later, we find ourselves in the midst of yet another presidential scandal; one which has made this movie once again relevant to our times.

The premise, which hits uncomfortably close to home, is about a war fabricated to deflect attention from a president's indiscretions. War is described as "show business" with all the trappings: slogans, nicknames, theme songs, and even merchandizing to show solidarity; all orchestrated by a media intent on projecting a party's "alternate reality" on an unsuspecting public.

However war, whether fabricated or not, is serious business and there are casualties. Iran has recently admitted to unintentionally shooting down a Ukrainian passenger jet, blaming human error and "US adventurism" for the crash. Human error can happen, and can be especially heightened during times of war. 176 lives were lost from this particular error; how much greater would have been the loss of life if this were on a nuclear scale.

The 2014 Danish documentary The Man Who Saved the World tells the story of Stanislav Petrov , a former lieutenant colonel of the Soviet Air Defence Forces and his role in preventing the 1983 Soviet nuclear false alarm incident from leading to nuclear holocaust . Thankfully in this case human error was successfully averted.

Human error is something that will always be present; and so we have to ask ourselves: is it worth it, to life and to our planet, to entrust such terrible war-making forces to fallible humans? The obvious answer is no, and yet we do. What can we do to change our ways, to guarantee our safety in an uncertain world?

In an ideal world, there would be no enemies, hence no war: war would be prevented by militaries before it occurs - Victory before War. There is a little known scientifically proven way to accomplish this, by using a brain-based technology known as Invincible Defense Technology (IDT). IDT incorporates non-religious advanced techniques of Transcendental Meditation (TM) which, when practiced twice a day in large groups, has the effect of raising the consciousness of all those within its field.

Extensive peer-reviewed scientific research has repeatedly confirmed that when large groups of experts practice these advanced techniques together, a powerful field effect is generated which affects the surrounding population. This results in measurable decreases in war deaths, terrorism, and crime whenever IDT is utilized.

IDT was previously utilized in Washington D.C. over a two-month period in the summer of 1993, where 4000 meditators gathered for an experiment to lower crime. The result, as documented by an independent board of criminologists, was a 24 percent reduction in criminal violence. This profound reduction in social stress also influenced the public approval of the US president, which suddenly changed from a negative trend to a positive trend, as predicted (Reference: Social Indicators Research , 1999, 47: 153-201).

A study published in May 2019 in Studies in Asian Social Science , 6(2), 1-45, found that IDT implementation by students trained in the advanced TM techniques resulted in a 96% decline in sociopolitical violence in war-torn Cambodia as compared to violence in the preceding three years.

The Global Union of Scientists for Peace (GUSP) advocates IDT as a cost-effective, simple means to rapidly reduce the societal stresses held to be the underlying cause of terrorism and war (see: https://www.gusp.org/global-peace-summit ).

Military and civilian groups in South America, Africa, and parts of Asia are currently field-testing this approach by creating Prevention Wings of the Military, using IDT to reduce crime, quell violence, create prosperity, prevent the rise of enemies, and create the conditions for lasting peace.

No nation can afford another war, and no country can feel safe as long as nuclear weapons are available to be deployed, whether intentionally or by human error. It is time for all of us to consider embarking on a new course of action, utilizing IDT to raise the global consciousness so that positive solutions can be found which do not involve war.

Because our next war may well be our last.
About the Authors:
Arlene J. Schar has served as Dr. Leffler's Executive Assistant at the Center for Advanced Military Science (CAMS) http://www.StrongMilitary.org since 2015. She has edited and co-authored many of Dr. Leffler's articles.

Dr. David Leffler served as an Associate of the Proteus Management Group at the Center for Strategic Leadership, US Army War College. Currently, he serves as the Executive Director at CAMS.