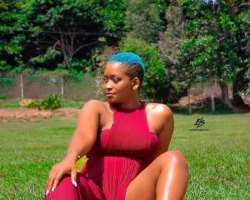 Bit of a break from politics. And yes I can, because I said so. Musician,Winnie Nwagi, is circling back on the well-tread debate over whether big women who put on shorts, or dress insensitively, is befitting of them. I know nothing about Nwagi's history but her voice in the interview shared on facebook, recently, by Hon.Nambooze, suggests strongly that she has always had a problem with men mocking her body one way or the other. And, therefore, she doesn’t want other women to suffer the same fate as her. Her humble background, I guess, prepared her to deal with the pressure of a big career. Years of struggle freed her from the debilitating fear of failure. Winnie reckons that a lot of big women are demonised by a section of society into wearing clothes they don’t want —due to their body shapes. In the interview, she also says that she is proud of being curvy and wants to join film acting. All I know is that People who want to show off their physique though don't wear baggy clothes - male nor female.

Personally, I’m an advocate of women dressing decently whether they are Muslims or not. There’s no need for a woman to show their thighs in public,as Winnie sometimes does, in the warm temperatures of Uganda. Covering up has a lot of benefits but, most importantly, it saves ladies from Manaroma(skin cancer). According to religion of Islam woman should only display her face and palms of hands in front of foreigner men (indoor and outdoor) and more than that is prohibited. In the 50-60s woman here in the northeast England, used to wear headscarves not for religious reasons to cover their curlers and I see the Queen still wears a one.

I've noticed a lot of younger-looking girls (teenagers maybe), posting pictures on Facebook wearing short shorts. Wonder if that is a style right now in Uganda.

And the guys, especially the elites, are wearing shorts that reach their ankles. That was a style attributed to old men with varicose veins in the 1960s in USA, but there's no accounting for taste. Overall, lets encourage more decency, less criticism and tolerance of others dressed in a way that isn't your style.