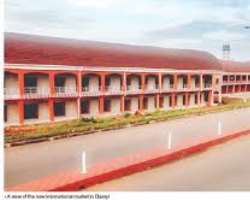 Association of Abakaliki building materials traders has appealed to the state government to extend the February 10 relocation deadline to enable them fully prepare.

Chairman of the Association, Ifeanyi Nwudele who disclosed this while speaking with Journalists in Abakaliki said lack of fund was hampering the speed of work at the new market.

He confirmed that the state government only provided land, while they were the ones developing the market with their individual funds.

Nwudele further assured the government of their readiness to keep the agreement that was reached concerning the bank loans, even as he thanked the government for providing the new site for them.

"The work is going-on fine. We are ready to relocate, because we like the place. We accepted the place whole heartedly. But we are begging Government to fulfill its promise of getting commercial banks to assist us with funds to develop the place.

"We want to assure Government of our readiness to pay back and on time, any money that bank will give us to develop the place.

"We also request Government to extend the time of relocation to enable us finish the ongoing work at the place", he said.

Meanwhile, the state government said that there was no going back on the relocation deadline

The Special Assistant (SA) to the Governor on Industrial Clusters, Ebonyi North zone, Hon. Peter Nwogbaga who disclosed this after inspecting the progress of work on the new site yesterday, said the new building material market when put to use would attract investors to the state.

He said the new market is over 20 hectares of land which was large enough to contain all the traders and had been carefully designed to be a hub for building materials in the State.

"The deadline is 10th February 2020 for them to relocate to this place and they will continue from where they stopped. Rome was not built in a day", he said.

Asked whether the state government had compensated the owners of the land, he said, "land does not belong to individuals but Government.

However, Government is going to do something about those who have little things here and that is why you see work going-on without hitches".

According to him, the new site will house those dealing on rods, cement, tiles, aluminum and welding, etc, and going to be a sort of hub for building materials in the state.

Explaining further, he said, "Government acquired the land for the building materials associations, but they are the ones that are building their shops according to the specifications given by Government.

"The essence of this is to bring Investors and businessmen to the state. If you watch the other side, you will see the timber shade. It will help the state harness the industrial aspect of the building materials.

Nwogbaga who said the Government and the traders had resolved all misunderstanding that hitherto existed between them, disclosed that the suit the traders earlier instituted against Government over the relocation had been withdrawn..

"Building materials dealers are the ones handling the project. They have resolved every issue they had with Government. They said they didn't know what Government was up to, and when they understood Government, they became happy. I was also made to know that they have withdrawn the suit they instituted against Government".