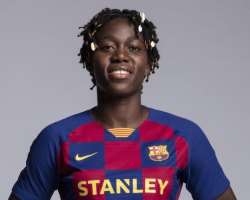 Nigerians were overjoyed when one of the most famous names to come out of the Falcons squad, Asisat Oshoala was declared as the CAF Woman Footballer of the Year. It was a soothing relief to all the football lovers since none of her male counterparts was found worthy of even being shortlisted for the male version of the award.

Success has many brothers and sisters but failure is an orphan. No sooner had she won that she started receiving congratulatory messages from friends, foes, fans and supporters alike.

Then the unexpected happened when it was leaked to the public that none of the five Nigerian representatives who were in the voting panel voted for her. This year, five Nigerians were part of the final decision process in the women’s category. Ahmed Yusuf (aka Fresh), Osasu Obayiuwana, Chisom Mbonu, Tunde Adelakun, and Perpetua Nkwocha.None of the aforementioned names found Oshoala worthy of being crowned the Queen of African Football.

Fresh didn’t bother to cast his vote opining that the Confederation of African Football (CAF) didn’t give him any ballot paper to exercise his franchise. Osasu Obayiuwana rated Oshoala 3rd, Chisom Mbonu thinks she is second best, Tunde Adelakun voted her 2nd best, while Perpetua Nkwocha rated her 5th in Africa.

This reinforces the age-long cliché that a Prophet has honour except in his own home. It is natural that she felt let down by her countrymen especially by Nkwocha who once dorned the green and white jersey during her hey days with the round leather game.

This shows that she is a truly a star and this may be her best victory as she was validated by outsiders and so the charge of nepotism against her wouldn’t hold water. Every disappointment is indeed a huge blessing.

This should be a big lesson to her fellow Nigerian youths who don’t believe in merit and always have to heavily rely on one godfather or mother to be upwardly mobile. There is still a space albeit miniscule for the reward for excellence and their mindset should be strengthened to make them soar even higher than eagles.

It’s obvious that despite her success, she still took it personal with one of the Judges. She had a twitter row with Obayiuwana which made her block him on the micro blogging platform. This was rather childish as he – a mature adult had the inalienable right to vote in whatever direction which suited him without owing her any explanations. I humbly advice that she should immediately unblock him as a sign of being magnanimous in victory. Life is too short to engage in needless spats with all and sundry.

A section of Nigerians opine that she was betrayed by her fellow countrymen and their argument is that the nation doesn’t support those who have what it takes to excel. The envy is so great that sportsmen and women pray day and night not be at the mercy of anyone when trouble knocks on their door.

What will you make out of the fact that the former Super Eagles Player and Coach, Samson Siasia has been abandoned by his so called country as he is currently fighting to clear his name from an alleged FIFA scandal that handed him a life ban. He had to resort to crowd funding through the Gofundme platform to raise the $250,000 to hire a team of legal counsels. Former player and coach, Christian Chukwu lifted the nations cup in 1980 when the country hosted it. He was battling with a life threatening ailment and it took the kind intervention of Femi Otedola who funded his treatment in the United Kingdom. Anthony Joshua was rejected by his country of origin when he wanted to represent her in the Olympics. Many athletes have to resort to self help to compete in international games as the government doesn’t care a hoot whether they lived or died. Some like Daniel Igali, Francis Obikwelu etc have had to naturalize as citizens of other countries so that they can keep their heads above water.

Oshoala may have carefully considered this stark reality of neglect when the chips are down which must have spurred her anger hormones to lash out on her official twitter handle.

Once again I reiterate that she celebrates her well deserved victory as all is well that ends well apologies to William Shakespeare. The non refusal of her countrymen to back her should make excellence her watchword as it triumphs over tribe, race, religion or anything that acts as a barrier between mortals.