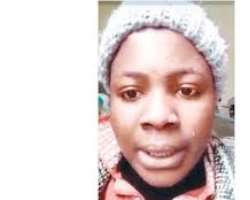 Omolola Ajayi, a young Nigerian girl who was trafficked to Lebanon on the pretext that she would be an English teacher has regained her freedom after a video of her crying for help went viral on social media weekend.

Chairman, Nigerians in Diaspora Commission, Mrs. Abike Dabiri-Erewa Monday disclosed via twitter that Omolola, a Kwara native, is now safe in Beirut with the Nigerian Ambassador to that country, Goni Zunna Bura.

Kwara State Governor, Abdulrahman Abdulrazak had taken up the matter and gotten the alleged trafficker, a friend of the family, arrested. Two other suspects including a Lebanese are also in custody.

Omolola who revealed that her parents, Kehinde Ajayi and Felicia Ajayi live in Offa Garage, Under Bridge, Ilorin, were also deceived that she would be teaching in Lebanon.

In the video, Omolola said some other females who were tricked and trafficked had died because they were not taken to the hospital when they fell sick adding that their master/ madam usually confiscate their travel passport on arrival.