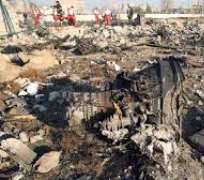 Onitsha Eastern Nigeria, 12thJan 2020-Accepting responsibility for downing a Ukrainian Boeing 737-800 (Flight PS752) and killing all the 176 passengers on board moments after it took off on Iranian soil is not enough to appease departed souls of the innocent 176 passengers drawn from seven countries. If this dastardly act is allowed to go by, then the souls of the ‘those murdered in the air’ shall never rest, Intersociety said today in a statement signed by Emeka Umeagbalasi, Chair of the Board and Ndidiamaka Bernard, Esq., Head of Int’l Justice & Human Rights.

As a matter of fact, the souls of the murdered, if nothing is done, shall permanently run riot from their cosmic world to that of the living; with the ‘spiritual riot and warfare’ waged for over 100 years by the victims of the Igbo Landing or Suicide in the US State of Georgia being a child’s play. In the instant case, therefore, there must be three-way-traffic-justice: for the ‘murdered in the air’, for the perpetrators (punishment) and for the society (deterrence). That is to say that the Government and leaders of the Islamic Republic of Iran must face int’l criminal investigation, punishment and de-radicalization, Intersociety added.

It is recalled that Iran has accepted responsibility for downing the Ukrainian owned Passenger Plane, loaded in Iran and heading to Canada. The civilian aircraft with 176 passengers including crew members crashed moments after takeoff, killing all the passengers. Initially thought, without proper or forensic investigation, to be aviation accident, Iran, emerging from its row with USA, grudgingly claimed ‘a mistaken’ responsibility; hinging on ‘imaginary cruise missile attack’ .

The slain nationals included 82 Iranians, 63 Canadians, 11 Ukrainians, 10 Swedish, four Afghans, three Britons and three Germans. The Canadian authorities also confirmed that the majority of the passengers on the flight were headed for Canada and that out of the 176 victims, 138 had listed Canada as their final destination. Of them, 63 carried a Canadian passport, but many others were foreign students, permanent residents or visitors. The Iranian military and Government authorities, on their part, said the passenger jet had been misidentified as a cruise missile flying over Tehran.

Accepting responsibility is commendable but it is not enough. In the context of international customary, humanitarian and human rights laws including the Geneva Conventions (Laws of War or Armed Conflict) of 1949, the Government of Iran acted beyond excuses and defenses. The downing and mass killings on Iranian soil further exposed the country’s gross incompetence and incapability despite its boast of ‘attaining a greater height or feat in modern military and scientific sophistication’; to the extent that its air defense system could not differentiate between ‘a cruise missile’ and passenger aircraft in the air. In all, the country has not grown militarily and tactically, except putting the Middle East and the rest of the world on the path of constant threats of fears, tears and bloodletting.

The worst of it all is that Iran acted and blundered under ‘no war situation’ as its war of words with the United States and its allies is nowhere near ‘a war situation’. Iran is also not in a state of internal warfare. And to the best of the world knowledge, USA and its allies has not declared war against Tehran which would have warranted activation of its territorial defensive system including countering or neutralizing the so called “cruise missiles’.

Assuming Iran is involved in inter-state or intra state warfare, the country would have still violated the existing Laws of War of 1949 premised on ‘Jus In Bellum’, ‘Jus Ad Bellum’ and ‘Jus Post Bellum’. This is because the Laws of War do not permit the shooting or destructive targeting of ‘non military necessity’ such as the referenced Passenger Plane or the Ukrainian Boeing 737-800 (Flight PS752). In such callous attacks and dastardly acts, no derogations or defenses or excuses are allowed. In other words, the perpetrators must be fished out and severely punished.

The Iranian acceptance of domestic and international responsibility also amount to ‘shedding of crocodile tears’ as till date, perpetrators responsible are still on the prowl and under the cover and protection of the Iranian Government. These, further, are clear violations of the int’l law principle of ‘complementarity’ and ‘no impunity’ or brazen and deliberate display of ‘inability and unwillingness’ to act.

The United Nations particularly the UNSC and UNSG are hereby called upon to act in coherent with powers and responsibilities vested or entrusted. The same way UN had intervened in the past by way of ‘independent civil’ or ‘criminal inquiries or commissions or investigations’ including looking into the assassination of former Prime Minister (Ms) Benazir Bhutto of Pakistan (2008), the 14 February 2005 assassination of Lebanon's former Prime Minister Rafik al-Hariri and the UN ‘int’l commission of Inquiry on Darfur Sudan (2006)’; shall be replicated in the instant case.

On the other hand, the Islamic Republic of Iran must have its present disastrous military and violent influence particularly in the Middle East and rest of the world curtailed or checkmated. The country has become a serious threat to international peace, security and safety. Our recent condemnation of the assassination of its conventional army general in Iraq does not absolve the country of regional and int’l responsibility in the context of threats to world peace and security. Our strong condemnation of the US action followed its callous resort to illegalities and shortcuts.

If radical Islamism was adopted by the Iranian revolutionaries as an ideology in their 1979 Iranian Islamic revolution, such ideology should not have been retained as major policy trust or direction, or given state color and protection. This is more so when to make the Universal Declaration of Human Rights possible in 1947/48, major world religions and their leaders including Catholics, Pentecostals, Anglicans, Muslims, Buddhists, Hindus, Judaists, etc, were congregated, aggregated and prevailed upon by the UN and the Elizabeth Roosevelt Committee to lower their respective radical ideologies for world to live in peace and human rights and co-exist.