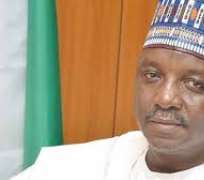 The Nigerian Business Leaders Forum has called on President Muhammadu Buhari to relive the Minister of Power, Engr. Sale Mamman, of his position, accusing him of incompetence, nepotism and gross disregard to due process.

The group which had earlier warned that the Nigeria Power sector is heading for a total collapse under the minister, said the nation's power sector has worsened in the last five months.

The group, in a statement signed by its National Coordinator Dr. Austin Iwe Igwe noted that it warned of the looming danger three weeks before the whole nation was thrown into darkness for more than 48 hours in December.

According to him, the Minister since assuming office has been fighting imaginary cabal in the sector but could not point out to one thing it has achieved in the last six months.

He added that Mamman, with his conduct believes he is not answerable to Nigerians particularly the business community who are the worst hit by the epileptic state of the power sector.

Furthermore, the group accused the Minister of nepotism saying he was allegedly disregarding the Civil Service rules to favour his fellow kinsmen from Taraba State adding that Mamman has over 50 aides all from Taraba State who are being paid bogus amounts as consultants to the Ministry.

The statement read: "The Minister has dented the image of this government and showed that the government is not coordinated or some ministers in the Buhari administration are working against the Next Level agenda of Mr. President. As you will agree with me, it is unheard of a minister blaming his predecessor who is a member of the same cabinet; government, political party and under the leadership of President Muhammadu Buhari for his own failure.

It is disgraceful and a dent on the collective dream and idea of good governance. The question we should be asking is what has the Minister achieved in the last six months he has been appointed as Power minister? This is someone who has not done anything; he hasn't come out with any policy that would benefit the public, he's yet to embark on any project except moving from one project site to another without any tangible significance to the sector.

Also, the Minister has failed to galvanize and consolidate on the achievements of the Buhari's administration in the power sector. It's wrong to say Babatunde Fashola who was Lagos State former governor, former power minister and also the current Minister of Works and Housing failed in the power sector. It is on record that Fashola's stint as the Power Minister brought so many changes to the sector but the current Minister has failed in his primary responsibility to consolidate on Fashola's achievements, rather than take the blame for his failure as the current minister of power, he is turning around to point accusing fingers and blamed his predecessor who achieved much more in the first term of fours years of President Buhari's administration. If their is anything, under Fashola as Minister of Power, Nigerians were not subjected to nationwide blackout which has become a regular tale under Sale Mamman.