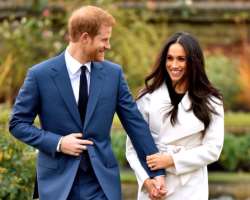 On Wednesday 8th January 2019, Prince Harry and his wife Meghan Markle made a shocking announcement, effectively ‘resigning’ from their duties within the British Royal Family.

However, merely days earlier, Nigerian Prophet TB Joshua of The Synagogue, Church Of All Nations (SCOAN) had warned of impending separation within the Royal Family in his much-publicised prophecy for 2020.

“Pray for unity and understanding among the Royal Family – because of what I am seeing,” the cleric stated in the word of prophecy written on December 28th 2019 which he said he 'received' after time in a 'prayer mountain'.

“We intend to step back as ‘senior’ members of the Royal Family and work to become financially independent,” the Duke and Duchess of Sussex wrote on their official Instagram account, adding the decision came “after many months of reflection and internal discussions”. The announcement from the famous duo exposed the widening rifts within the British monarchy, already exacerbated by the fallout over Prince Andrew’s alliance with the late convicted sex-offender Jeffrey Epstein.

“We now plan to balance our time between the United Kingdom and North America,” the statement continued, stating this would provide them “with the space to focus on the next chapter, including the launch of our new charitable entity.”

Whilst releasing the prophecy publicly on Sunday 5th January 2019, Joshua explained that many of the events he had foreseen had begun to take place or would happen imminently.

In the same prophecy, TB Joshua warned of “an incident” in the nation of Iran “that will cause panic throughout the world”, confirmed days later when a US drone strike killed prominent Iranian General Qasem Soleimani.

The message regarding Iran followed a prophecy Joshua gave a decade earlier in which he warned of the repercussions of an “attack on Iran” by “super-powers”, going on his knees to pray for peace in the volatile region.

Concerning the United Kingdom, Joshua additionally warned in his 2020 prophecy of “agitation from a section that wants to leave” and also called for prayers “for the Queen and Duke of Edinburgh” regarding ill-health.

He equally cautioned about the “economic repercussions” stemming from Brexit, insisting it “needs more time to stand on its feet” with the co-operation of the European Union leadership.

Since its release, the video of the prophecy published on Emmanuel TV’s popular YouTube Channel – which included messages for Nigeria, Russia and USA – has racked up over 250,000 views.