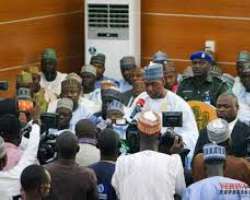 Governor Babagana Umara Zulum of Borno state today, hosted heads of the military, paramilitary and security agencies to assess and review security situation of the state.

The state security council meeting was held behind closed doors at the State Executive Council Chamber of the Government House Maiduguri.

The meeting, which was chaired by the governor and the Secretary to the State Government, SSG, Alhaji Usman Jidda Shuwa as it’s Secretary .

it was gathered that the meeting was convened to brainstorm on strategies to tackle the growing security concerns in the state.

Senior commanders of the Nigerian Army, AirForce, the Navy, police and other security establishments were all in attendance.

Measures adopted by the security council after an extensive review, were not made public in line with security tradition.