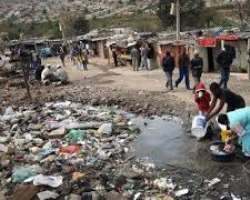 There is no other country in the world where current politicians and their alter ego of crony businessmen steal and sell out the whole House, as they do in Africa. Most African Head of States cannot differentiate personal properties from those of the State. As far as they are concerned all the state income belongs to them while their people wallow deeper into poverty. It creates poverty that dislocate and infect folks’ mentality adversely by victimizing one another in a variety of ways.

Those that think we do not earn enough, no matter what, to provide all the infrastructure we need in every city are basing the cost of these projects on international price in Western and Asian countries that sell their products and services to Africa at padded retail prices. Chinese may give us a discount, but it is based on what Americans and Europeans would sell for. Russia is a leader in Space and Nuclear Science, based on local prices. So are China, Japan and India with local expertise. United States spends more per capita on healthcare than other countries with universal health coverage.

Imagine if a country as poor as North Korea or Iran has to buy their nuclear capability from International market? Africans buy their acquired taste of goods and services at the world market. This is then sold by business men that front as middle men and make their profit from the little spending power of poor countries. Once Africans lose control of local market prices, they must pay through their noses for acquired tastes with little left for local infrastructure expenditure.

There are formidable obstacles in place that make it more difficult to trade across our own Continent limiting local goods and services that can flourish across the countries. Inter-African trade can only become a reality if we patronize African goods and services through West, East and South Africa easier than we do through Europe, America and Asia. We always thought that commerce is only cumbersome within Africa by Air but the same is true by ship. How did we become conveyors of foreign goods across Africa?

African countries have been building projects like bridges, towers, automobiles and trains lines for over 70 years. If our engineering and environmental students had been embedded in these projects, they could have come out as competent as other world experts by now. But our politicians and business cronies prefer foreign contracts so that they can start new projects with new administration and launder our meager forex reserves abroad.

Mirrors in exchange for gold may be too far into history but you can imagine what the next generation would think about “educated” Africans exchanging uranium and cobalt for plastics as their latest prized possession. None of our Steel industries have been able to function to its capacity while steel glut hit world market. Even our oil producing countries have not been self-sufficient in finished petroleum products since the 60s!

As much as most Africans want to enjoy the low price of oil produced in their countries since it is the only item they can benefit from, the subsidy goes to the billionaires. Redistribution of the savings or rebates to the poor in need of petroleum products must be devised. Apart from the Petroleum Trust Funds under Buhari; most savings after, have been diverted to private pockets in most African countries.

Indeed, the most popular goods and services Africans trade with one another, have always been foreign products. It is not by accident that foreign rice, bottled drinks, canned fish and meat are commonly traded between African countries. We have developed another taste like most developing countries for bread and rice as staple food. Most of the wheat is imported into African countries boasting overseas production and their farmers’ income. Shortage of wheat from foreign countries equals shortage of bread locally that could turn into food protest and riot!

There is nothing wrong with genetically modified seeds if it is done locally by African universities to withstand diseases, last longer and grow abundantly faster. But if these seeds are modified by Monsanto in Europe or America and sold at international prices to our farmers, our staple meals at home have been displaced! Farmers in Indian had to mortgage their land to keep buying seeds from international corporations only to lose their only possession to banks as collateral. This is what is happening in Africa as we mortgage our future to Europe, America and Asia as we believe in ready-made imports.

God gives us our Daily Bread but not from foreign grains. Bread is made from wheat which is not indigenous to our land. We have yams, beans, millet, corn and cassava later that had been our staple food. The rich business men have always traded with the Europeans as middle men that distribute good and services made abroad or assembled in Africa. Even the canned food like fish that are caught in our waters, bought cheap (like cocoa and coffee), canned overseas and sent back to us as exotic food.

Case in point. Maize as (mieliepap/kuku) staple food or those of us that eat different garri may not notice the difference as Eba on the table. Yet people prefer to pay more for one type of garri. This is not only in Nigeria, Ghana, East or South Africa but also in Europe and America. What a difference a few decades make. Before maize and garri became readily available in Europe and America, we used to substitute maize or garri with wheatlet. Pounded yam was substituted with mashed potatoes mixed with biscuit. Can anyone from those days believe that some Africans now use wheatlet instead of the real garri, yam, corn, maize and millet in Africa? We even rejected cassava bread!

If anyone is wondering where this mentality for excessive profit to satisfy exotic tastes comes from, check the salary of politicians and money made by their cronies from inflated contracts that are hardly completed. Our poor cannot have the same spending power as Europeans and Americans since our local economy cannot bear it. It is the African privileged class that want the same spending power or more than those overseas so that they can buy whatever, anywhere. But based on African economy?

Kwame Nkrumah first tried Cocoa Cartel to increase the spending power of cocoa farmers, rather than farmers begging for necessities which is more common in developing countries. He tried to control the supply and price of cocoa so that African and South American farmers could make more money from giant international companies like Kisses producer Hershey Co., M&Ms and Snickers bars-maker Mars Inc. or Mondelez International Inc. producer of Cadbury Dairy Milk bars and Oreo cookies.

Our politicians must fight to increase the spending power of Africans, not exploit them like foreign companies that never earned foreign income for Africa. Despite threat of alternate sources of cocoa, HYPERLINK "https://www.wsj.com/articles/new-cocoa-cartel-could-overhaul-global-chocolate-industry-11578261601" Ivory Coast and Ghana, producers of more than 60% of the world’s cocoa have banded together to form their own cartel that Nkrumah tried before the Organization of Petroleum Exporting Countries. According to the World Bank, 80% of cocoa producers, or four million people and their families HYPERLINK "https://www.wsj.com/articles/west-african-poverty-alleviation-program-makes-cocoa-this-years-hot-commodity-11570622401?mod=article_inline" , live on less than $3 a day.

There is more work to be done to free ourselves from our induced exotic tastes.