Re: Mrs Obiano  The Substantive Governor 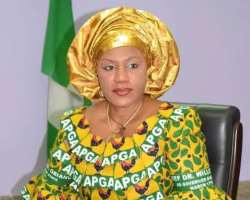 Our attention has been drawn to the above diatribe authored by a faceless Dr Fabian Anigbogu who claimed to be Coordinator of a non-existent Ayamelum Frontiers for Democracy and Good Governance.

Having confirmed the lack of authenticity in the concoction and the singular objective to lie and malign the person and character of the wife of the Governor of Anambra State, Her Excellency, Mrs Ebelechukwu Obiano (Osodieme), we sought to ignore the puerile contents. But better judgement required that the facts behind the infantile attacks be laid bare lest the fabrications are swallowed hook line and sinker.

Since the Governor of Anambra State, Chief Willie Obiano dislodged the fake revenue hounds and collectors across the state, they have gone for the juggler fighting ferociously to get him to backtrack and allow the thriving heist to resume. But evidence abound that the automated and Pay Direct System the government has put in place is in the best interest of ndi Anambra.

Secondly, the 2021 election has arrived early in Anambra State because many of the active dramatise personae are seemingly idle with army of paid recruits already briefed to spill vile and libelous contents on the Obianos through the free internet space in the hope that it would stick and diminish the Governor's giant strides in office.

It is said that when you wish to peddle a lie and allow it to stick in place of truth, you sugar coat it. The fact that the merchants of falsehood have dragged Senator Uche Ekwunife into the fray to sweeten a non-existent tale of the absurd is telling. We will not humour them by dwelling on fabrications from the rumour mill because facts are sacred, opinion is free. Unfortunately, in this age of free media space, disinformation by uncultured and untrained hands induced by pecuniary concerns must be confronted to save our collective sanity.

It has never been in doubt to fair-minded people that Chief Willie Obiano (Akpokuedike) is effectively in charge of affairs as the Governor of Anambra State. But fantasy story tellers will always attribute power to the wife who is in good stead with her husband in their failed attempt to score cheap political points.

Mrs Ebelechukwu Ekwegbalu Obiano (Osodieme) is well bred and her actions and deeds are evidently as elegant as her imposing persona. Little wonder adversaries always make her their target to get at her husband. The story of her noble background and how she met and married her husband is already in public domain.

It is also on record that the urbane banker extraordinaire as he then was, Chief Willie Obiano had an excellent record without blemish for 18 years at Fidelity Bank and retired as Executive Director. The likes of the fictitious Fabian Anigbogu and his equally faceless Ayamelum Frontiers for Democracy and Good Governance would not bother to ask how many Executive Directors of the bank in Chief Obiano's time became the Managing Director.

They have also gone to great lengths to list names of companies and innocent persons which they allege are fronts for revenue collection by the Governor's wife. It is perhaps one of the easiest lies to peddle. Why only 10?

The fact is that Anambra State has one of the most participatory Executive Council sessions with every issue robustly debated prior to approvals. It is also on record that Anambra barred the use of revenue collectors or agents and persons caught in the act are apprehended and tried.

There is no need going into pre-election disputations and issues which are essentially a party affair and the party mechanism has done well at handling internal differences. Thus the attempt to knock heads together by dragging Osodieme is indeed infantile.

Targeting the wife of the Governor is a cruel strategy to lure the chicken out by attacking its chicks. "When we get Mrs Obiano, we get her husband." To them nothing is sacrosanct in this war of attrition.

Nonetheless, Mrs Obiano's compassion and dedication to God has placed her in the place where she can impact live positively hence her concentration on charity programmes. Unfortunately, they keep pushing the myth in their strenuous effort at making her an "Almighty First Lady" in order to whittle her husband's commanding influence of state affairs. Fortunately, they have not succeeded and that is why Willie, a dyed-in-the-wood Administrator and Auditor is still working in spite of the daily staple of devilish distractions.

There is no doubt that the promoters of this hate group are determined to bring down anything on their part. However, in the overriding interest of ndi Anambra, it is our plea that they be ignored no matter how hard they try.

Emeka Ozumba is the Deputy Chief Press Secretary to the Governor