Kayode Abegunde: The Beckoning Of Destiny 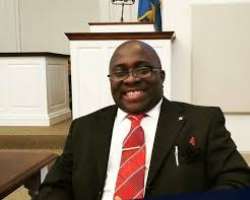 “Do not go where the path may lead, go instead where there is no path and leave a trail.” – Ralph Waldo Emerson

“We are not here to curse the darkness, but to light the candle that can guide us through that darkness to a safe and sane future.” - John F. Kennedy

There comes a time in the trajectory of man, when man has to evaluate his relevance to humanity, to his environment. In the course of that evaluation, seismic decisions would have to be made; decisions that would seem weird while simmering in its irresistible relevance in juxtaposition to reality. Such decisions might be a run against the convention. It might be against the run of tradition. It might be against the run of expectations. But nevertheless, it has to be taken, based on conviction, driven by a vision, propelled by passion and mobilized as a mission for accomplishment.

For some of us, who believe in fate, in our hearts and consciousness, well comforted is the concept of destiny. With this concept of destiny are intravenous variables of Providence and Divinity. They are the catalysts of what has to be, what will be and what must be. They are the tools of fate. The embryos of destiny. Providence and Divinity in collaboration with fate, come together to format destiny, to which we must all come in all our journeys on Earth. It is this destiny that is currently beckoning to the man, Kayode Abegunde.

In the History of Delaware, called the "First State," because it is the first State in the American Union of the first 13 Colonies to approve the November 1787 Constitution, no African American has ever won any statewide election into the office of Insurance Commissioner. This is the first time this office would have an African American aiming for the seat in a State where the first immigrants, the Dutch, first landed in 1631.

Kayode Abegunde, the man responding to the beckoning of destiny, who is making record as the first African to bell this cat and contest for this post deserves some kudos for treading this path. The interesting and beautiful thing is that in a State, where the Swedes took control in 1638, and lost to the Dutch in 1651, before the British finally took over in 1674, Abegunde, the man of destiny, has support base across the racial and gender lines for his bid.

Abegunde who has two MBAs from Wilmington University, Delaware with one concentrating on Finance and another concentrating on Health Care Administration, has his vision clearly defined for the office he is contesting for. His primary goal is to seek and ensure protection for insurance consumers in the State and advocate for Cultural competence on the part of the Insurance Companies.

Determined to put the benefit of his experience to the services of the Delaware State that ratified the U.S. Constitution by a unanimous vote of 30-0 on December 7, 1787, Abegunde is promising the consumers a sense of inclusion that would help to deploy its diversity for the benefit of the average Delawarean without manacling the growth of insurance business in the State.

“We want to protect insurance consumers in our State. That is our first and primary priority. But we want to do it in a manner that would not destroy business so as to protect employment of our citizens in the industry,” Abegunde said, while explaining the thrust of his agenda, as the Delaware’s Insurance Commissioner.

Abegunde who traversed the Rocky City, where the University of Ado-Ekiti was domiciled from whence he obtained his Bachelor of Science degree in Accounting, had been part of the team that led Tax Audit for Lagos State Board of Internal Revenue in Nigeria. He attended Capella University for his Ph.D. in Human Services and Public Leadership, and later transfer to Wilmington University for Doctor of Social Science in Prevention Science. He is an Alumni of Delaware Citizens Academy under the United States Department of Justice.

As a State that had 5 signatories to the Draft US Constitution despite its being small compared to Georgia with only two signatories and the big expansive Pennsylvania with eight signatories, Delaware would benefit from Abegunde’s vision to ensure reliable insurance coverage at reasonable rates for Delaware consumers as well as encourage timeliness of claim decisions.

Over the years, Abegunde has served in various capacity as an Accountant, Marketing executive, Insurance Agent, Financial Analyst, Consultant, Tax specialist, Investigator, Auditor, Project Manager, Program Director, Human Service Practitioner and Health Care Administrator. He is a certified member of several professional bodies. Past member, Citizen Budget committee Charter School of New Castle, Delaware. He led the audit team of Llangollen Estate Civic Association as the chairman and currently elected as the Vice President of Llangollen Estates Civic Association in New Castle. He was appointed as a Commissioner, Behavioral and Mental Health Care and also appointed as New Castle County Financial Advisory Council by the County Executive. He is a Democrat committee member for 17th District.

Abegunde who is a good communicator is imbued with the ability to understand and effectively interact with people across cultures. He is an apostle of equity and justice for all. His dream as the Insurance Commissioner has a departure point from the purview of an average consumer, the ordinary citizen that is often trod upon by the powerful corporations.

The State of Delaware which was governed as part of Pennsylvania from 1682 to 1701 but had continued to share the same Governor with Pennsylvania until 1776 when all ties were completely broken, would be richly blessed by the ascendance of Kayode Abegunde as the State Insurance Commissioner.

Kayode Abegunde would need your support to be able to reach this destiny that is beckoning to him. Your votes would be worth its value when you give him that push to become the Insurance Commissioner for the State of Delaware in and for our collective interest. Give him your support.

“Let us not despair but act …. Let us not seek to fix the blame for the past – let us accept our own responsibility for the future.” – John F. Kennedy