TETFUND: Who is afraid of Suleiman Bogoro? 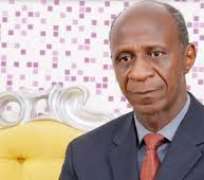 Why do we like to do things most of the time blindly, not minding the consequence of some of our actions? Why do we not know how to celebrate those who have indeed distinguished themselves in service to our fatherland?

The above questions came to my mind when I stumbled on a call for the Economic and Financial Crimes Commission (EFCC) and the Independent Corrupt Practices Commission (ICPC) to investigate Professor Suleiman Bogoro, the Executive Secretary of Tertiary Education Trust Fund (TETFUND). I was somewhat confused as to whom they were referring to.

The same Professor Suleiman Bogoro that has transformed the operations of TETFUND or another? I asked myself. I considered such calls a disservice to a man that has indeed shown like a bright light in administering the affairs of TETFUND to the admiration of all and sundry in the tertiary education sector.

I am particularly conversant with the transformation at TETFUND since 2019 when Professor Suleiman Bogoro was reinstated as executive secretary. I am aware of the jubilation that greeted his appointment. Accolades were not in short supply as they continued to pour unabated for a man who for the two years he held a stint as Executive Secretary brought numerous reforms in the operations of TETFUND, as well as the entrenchment of transparency and accountability.

As a testament to this, only recently, the International Computer Driving License (ICDL) awarded the TETFUND under the watch of Professor Suleiman Bogoro, the Best Project in Education Award for "its commitment to integrating ICT into the processes of its Beneficiary Institutions across the country to enhance the skills of academic and non-teaching staff."

It is also on record that Professor Suleiman Bogoro was recognized as the Public Service Person of the Year 2019 at the Leadership Newspapers Awards, in recognition of his efforts at “promoting transparency and accountability in the conduct of public affairs in Nigeria.”

You would agree with me that this can't be the same Professor Suleiman Bogoro that they intend to drag his name in the mud before the public as corrupt and one lacking in transparency and accountability in the conduct of the affairs of TETFUND.

I must admit that I am still in shock with the accusation of Professor Suleiman Bogoro. However, I am consoled that those behind this campaign of slander and defamation of character are indeed disgruntled and likely amongst those whose sources of income have been stopped with the reforms introduced in the operations of TETFUND.

While it is understandable that we are in a clime where one reputation is quickly rubbished when you stand on the side of truth, it is also despicable how some individuals and organizations would condescend so low to the extent of peddling outright falsehood on individuals in return for a plate of porridge. The way and manner these mischievous individuals have dragged the name of Professor Suleiman Bogoro in the mud is most despicable.

This largely explains why some intellectuals and technocrats would always hesitate before taking up a public service appointment at the end of the day, because some disgruntled people within the system in active connivance with contractors would do all possible to undermine those who have so decided to be excellent in their service.

The case of Professor Suleiman Bogoro is that of a silent achiever and one who has matched words with actions since he resumed the leadership of TETFUND. It is on record that since assumption of office, there has been a turnaround in the fortunes and operations of TETFUND in the sense that transparency and accountability are the watchwords. For some of us conversant with the happenings in TETFUND, we dare say the agency has never witnessed this level of administrative competence that has given rise to institutional reforms that have placed TETFUND on a high and enviable pedestal.

I am tempted to think that one of the sins of Professor Suleiman Bogoro is the bold step taken by TETFUND to retrieve over N10 billion from non-performing institutions in recent times. According to him, the monies were meant for projects awarded, but not executed by beneficiary institutions. What does this tell you? Doesn't it speak the volume of a man of integrity and impeccable character?

It is, therefore, my considered opinion that no amount of blackmail can deter Professor Suleiman Bogoro from implementing institutional reforms in the operations of TETFUND. This is on the heels of the fact that only recently, Professor Suleiman Bogoro threatened to sanction and blacklist any contractor who fails to execute any of the TETFUND's contracts awarded to them according to specifications.

It is thus naturally expected that once you fight the monster called corruption, it also fights back. And this is the case of TETFUND and nothing more. I think well-meaning Nigerians should do well to state in unequivocal terms that Nigeria belongs to all, and those sacrificing should not be vilified for merely refusing to bow to the enemies of our country.

And those behind this ill-fated campaign of calumny should do well to desist from such as TETFUND under the leadership of Professor Suleiman Bogoro is indeed on the right track and should not be distracted. It is not business as usual, and so shall it remain. Its either they want to join hands with him in service to Nigeria or leave him alone. This is not the time to pull him down. Rather, a time to lift him in appreciation for his excellent contribution to the development of tertiary education in Nigeria.

Olawepo is a public affairs commentator and wrote this article from Abuja..