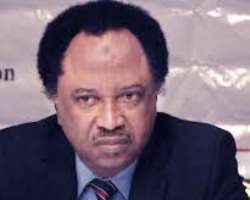 More trouble appears to be piling up against the detained former Kaduna Central Senator, Shehu Sani, over an allegation that he demanded and collected about $25, 000 in bribe from the Chairman of ASD Motors, Alhaji Sani Dauda under the guise of paying same to the Chairman of the Economic and Financial Crimes Commission, Ibrahim Magu, in order to free him and his firm from any probe by the agency.

The cash has been retrieved and deposited in EFCC custody and to be used as exhibit against the embattled former vocal politician, who was taken into custody two days ago.

The development came, as both Senator Sani and his accuser met face to face inside the EFCC headquarters on Thursday to confront each other on the offer and receipt of the alleged bribe.

Both men were grilled for hours on Thursday by EFCC interrogators.

And, to pave the way for unfettered questioning of the accused, the EFCC has secured a court order to detain Senator Sani for two weeks, the Vanguard reports, quoting a top source in EFCC.

The businessman according to the report also accused Senator Sani of dropping the name of the Chief Justice of Nigeria in order to extort an additional N4 million from him over a case he has in court.

Alhaji Sani said Shehu demanded the money as cash to be given out as bribe to four judges who would hear a case instituted by one Abubakar against his firm, ASD Motors. Alhaji Sani said for that reason, Shehu Sani demanded and collected the equivalent of N5 million in Dollars with a promise to give N1 million out of that to unnamed EFCC officials. He also claimed that the senator came back on Nov 29, 2019, saying that the prosecutor in his case could not do anything about it but that he had discussed the matter with Magu who asked him to bring $20,000 to resolve the case.

Alhaji Sani said that although he argued that Magu is said to be incorruptible and would not collect the bribe, the former lawmaker, convinced him to part with the cash, insisting that the EFCC boss was his friend and that he would accept the cash in Dollars. According to the complainant, Shehu collected additional $10,000 from him on November 29, 2019, and thereafter refused to pick his calls or reply to text messages and only grudgingly refunded the sum of $25,000 of the amount to him on December 24, 2019, after he had reported the scam to the EFCC.

According to him, Shehu had shunned him until he was arrested and detained on New Year’s Eve by the operatives of the EFCC. But Sani has denied the claims by the complainant and appeared unruffled by the issues raised against him.