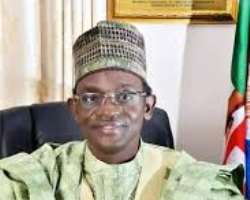 Yobe State Governor, Mai Mala Buni has expressed his best wishes and goodwill messages to the people of the state to mark 2020 New Year.

The governor pardoned six (6) Prison Inmates who were convicted and are serving jail terms for various offences to be released immediately and reunite with their families.

A statement issued by the Honourable State Commissioner of Information, Home Affairs and Culture, Alhaji Abdullahi Bego yesterday said the governor expressed optimism that given the groundwork laid in the recent period, 2020 will be a year of renewal and more socio-economic progress for the state.

Governor Buni while reflecting on the outgoing year, observed that 2019 was full of opportunities and trials for the state but expressed gratitude to Almighty God for the successes the state has recorded during the period.

The statement read in part: "His Excellency Governor Buni commends the people of the state for their resilience and the security agencies for their hard work on behalf of peace and security.

"The governor urged the people to continue to partner with the security agencies to ensure a peace that lasts across the state.

"As part of celebrating the New Year, His Excellency Governor Buni has also granted pardon to six inmates who were convicted and are serving jail terms for various offences.

"Others are Manu Dari, jailed for three years and serving in Gashu’a; Adamu Bello serving a jail term of two years and seven months in Potiskum and Adamu Jauro Julee who was jailed for 11 months and 23 days and now serving his jail term at the Potiskum Medium Security Prison.