Abiodun Bolarinwa: Celebrating A Yoruba Youth Leader And A Philanthropist On His Birthday 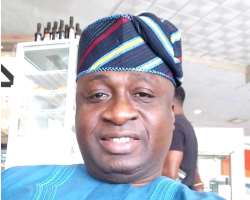 Lives of great men all remind us we can make our lives sublime. And departing, leave behind us footprints on the sands of time. Let us, then, be up and doing with a heart for any fate, still achieving, still pursuing, learn to labour and wait- H.W. Longfellow.

Some people believe that a tribute to individuals doing well to others in a society like ours amounts to bestowing undue praises to such people. What they however don’t know is that a tribute to those contributing immensely to humanity and society at large is really a tribute to God for the work He has accomplished through such individuals.

That is why a birthday tribute to Comrade Abiodun Oluwasegun Bolarinwa, the President-General of Yoruba Youth Forum, YYF is not only about appreciating him for his immense contribution to humanity and society but to thank God for his life and also encourage him to do more.

As a philanthropist, Bolarinwa believes that “giving is not a lifestyle; it is a way of life for anybody that truly believes in God. That is why nobody ever goes to Bolarinwa crying that doesn’t come back with smile. He is very sympathetic, clean-hearted and sweet-spoken; he never disappointed a sorrowing person. He would first wipe out his/her tears, make them comfortable and then discuss and find a practical and workable solution to their problems. Another unique attribute of Bolarinwa is that he forgives easily. I have seen him assisting many who have tried to slander him as the President-General of Yoruba Youth Forum, YYF. Unlike many other rich Nigerians, Bolarinwa is an epitome of humility. If you’re looking for a humble philanthropist in Nigeria, Abiodun Bolarinwa will no doubt appear on the list of top 5.

In the area of empowering the youths, Bolarinwa has provided employments for many young Yoruba youths. He has countless of other youths who he is giving scholarship to. No wonder, his group, the Yoruba Youth Forum, YYF is focused on the empowerment and emancipation of Yoruba youths and the entire Yoruba race.

He has over the years being championing the course of Yoruba people with his own personal money. ‘General’, as he is fondly called by his numerous admirers and due to the virtue of his office as President-General of Youth Youth Forum, YYF, Bolarinwa has truly live up to the saying of Oliver Wendell: “To live is to function. That is all there is in living. Today, he can be called a Yoruba youth leader and a philanthropist of note.

Bolarinwa is a man who detests injustice and is always ready to fight for the common man. Because of this, he is not a friend of criminally minded people and land grabbers especially in Ibadan who have embarked on a vicious campaign to destroy his good reputation with direct connivance of some corrupt police officers. For a man who is like a son to former President Olusegun Obasanjo; he has refused to join the bandwagon of these criminally minded individuals and land grabbers in Ibadan.

Comrade Abiodun Bolarinwa who has served Nigeria meritoriously in the Nigerian Army under the dark days of late military head of State, General Sanni Abacha almost lost his life for standing by this same truth. He is one of the few patriotic Yoruba military officers who refused to betray the Yoruba race under Abacha. His book on his experiences during the Abacha era will be coming out soon.

Comrade Abiodun Oluwasegun Bolarinwa, you should know that God made you unique. God gave you talents and gifts. And, most importantly, He gave you His love and salvation. May you be blessed this day and throughout your life. People will get jealous of your achievements and amused at your failures. But in the end, people don’t matter. Only you and your journey in life is all that there is. Happy journey and a very happy birthday