Haitians Are Celebrating Their 216 Years Of Independence 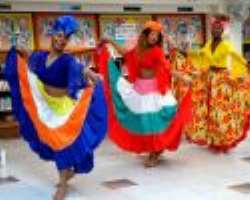 Let's not forget that the Haitian Revolution was a successful anti-slavery and anti-colonial insurrection by self-liberated slaves against French colonial rule in Saint-Domingue, now the sovereign state of Haiti. It began on (22 August 1791) and ended in 1804 with the former colony's independence. It involved blacks, mulattoes, French, Spanish, and British participants.

On January 1st, 2020, Haitians all around the world are celebrating their Independence Day by partying together and eating SOUP JOUMOU with their close friends and families even when there are a lot of protests and chaos across Haiti. The Haitian Declaration of Independence was proclaimed on (1 January 1804) in the port city of Gonaïves by Jean-Jacques Dessalines, marking the end of the 13-year long Haitian Revolution. The declaration marked Haiti's becoming the first independent Black nation in the Western Hemisphere. Of course, Haiti and Haitians were the first black nation that won a successful revolt.

"We are celebrating our Independence Day on (January 1st, 2020) again this year by partying and eating SOUP JOUMOU but we will continue the fight so we can make Haiti independent and free again.", said Mr. Werley Nortreus.

Haitian Revolution, series of conflicts between 1791 and 1804 between Haitian slaves, colonists, the armies of the British and French colonizers, and a number of other parties. Through the struggle, the Haitian people ultimately won independence from France and thereby became the first country to be founded by former slaves.

From 2017 until today, protesters all across Haiti and across the Diaspora are asking for the resignation of the current Haitian Government led by President 'Jovenel Moise' and PHTK so they can establish their own Government but the current Haitian Government that was established by the U.S. refused to step down. Hundreds of protesters are planning to march from downtown Port-au-Prince to the U.S. Embassy in 2020 to demand the Trump administration stop supporting President Jovenel Moise, who is named in the latest corruption report issued by Haiti's Superior Court of Account and Administrative Disputes. Hopefully, the Haitian population hopes to install their own Government and leaders in 2020.

"The United States is well-developed but Haiti is not. The U.S. must understand and allow us to save our only home country because it is time for Haiti to deliver from the Elites who don't want Haitians to deliver.", one protester told BDR! Live, Radio Television Caraibes, Tripotay Lakay, Radio Kiskeya, VOA, and Bon Déjeuner! Radio's journalists.

Haitians are celebrating their Independence Day (216 years) but the fight to make Haiti independent and free will continue.