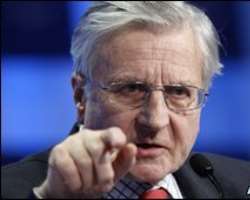 The head of the European Central Bank (ECB) has said that EU governments' borrowing levels should be more strictly policed in the future.

Jean-Claude Trichet said rules on borrowing needed to be much stricter, with tougher sanctions in place for countries that break the rules.

Following the financial crisis, many governments borrowed huge amounts of money to pump into their economies.

“The ECB believes that a true quantum leap is needed in the framework for surveillance and adjustment of fiscal policies,” Mr Trichet told the European Parliament's committee on economic and monetary affairs.

'Quasi-automatic' sanctions
“A more stringent implementation of rules and procedures is essential. The [European] Commission should have greater responsibility by making proposals which can only be modified with unanimity in the [European] Council, rather than mere recommendations under the Stability and Growth Pact.”

Mr Trichet also called for “quasi-automatic” sanctions to be applied earlier and to be “broader in scope” for those countries that break the rules.

In the aftermath of the financial crisis, however, some governments saw their deficits grow to more than 10% of GDP.

Concerns about high levels of debt, particularly in Greece, Portugal and Spain, led to fears that some countries may be forced to default on their debt repayments.

Stock markets fell as a result, and governments across Europe are now implementing spending cuts in order to cut their deficits.

These cuts could undermine the economic recovery, some analysts fear.