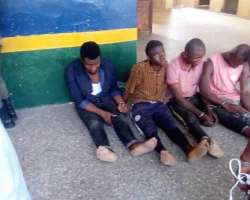 The aborted Mpape Bank robbers that were arrested on Saturday after being circled in the First bank building for some hours before the arrival of police have been paraded and they made shocking revelations.

According to media report, the insider man for the Abuja money heist happens to be the Branch Manager of the First bank in Mpape community.’

According to claims made on Twitter by Special Assistant to the Senate President on New Media, Abubakar Sidiq Usman, the robbers had the backing of an inside man who happens to be the branch manager of the community bank in the suburbs of Abuja.