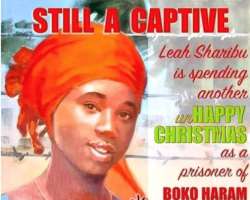 The Northern Christians have demanded the release of Leah Sharibu as Christmas gift from President Buhari on December 22, 2019, about three days to Christmas. In a statement, the "Christian leaders in the North under the auspices of Northern States Christian Elders Forum (NOSCEF), have asked Nigerian President, Muhammadu Buhari to present the missing Dapchi schoolgirl, Leah Sharibu to the Christian community as their Christmas gift."

The Northern Christian Elders argued that, the Federal Government has the “wherewithal and the competency” to effect the release of Miss Sharibu who has been withheld by the Boko Haram insurgents since the abduction in 2018." In a Christmas message made available to journalists in Kaduna on Sunday, NOSCEF’s Chairman, Mr. Ejoga Inalegwu, said "the release of Miss Sharibu would be the most cherished Christmas gift for Christians in Nigeria."

We would, "recall that, Leah Sharibu was among the 110 students of the Government Girls Science and Technical College, Dapchi, Yobe state, who were abducted by Boko Haram terrorists on February 19, 2018. It was reported that, five of the girls died, 104 were released by the insurgents on March 21, 2018, following negotiations with the Federal Government, while Sharibu was held back by her captors due to her alleged refusal to deny her Christian faith."

NOSCEF however said, “We plead with the President, Muhammadu Buhari, to give the Christian community of this great nation, the Christmas gift by ensuring the release of our dear child Leah Sharibu from the brutal custody of the Boko Haram. We believe the government has the wherewithal and competency to effect her release.”

Again, Ejoga, speaking for NOSCEF, also lamented the state of the nation, saying that Nigerians are heartbroken because leaders have abandoned God and every godly value that makes a nation great. He noted that Christmas is a message of hope for a people who have lost every hope and a good news to revive the hearts of those in despair; calling on men and women of conscience to cry out loud so that the situation does not deteriorate further."

Bishop Funmilayo Adesanya-Davies, the JARMAN MATASAN AREWA recalled that on the birthday of Leah Sharibu, 14th. May 2019, the same clarion call was made by Leah Sharibu Foundation, Prof. Mercy Ade-Davies Foundation, other foundations and several well meaning Nigerians on behalf of Miss Sharibu, but the President has neither responded nor the presidency reacted to make any statement till today.

The Christian girl-child is being ill-treated more and more in Nigeria today; and the APC government seems not to be bothered. Just this week, we read in a post that a Christian girl named, "Goodness Thomas, of the Valedictorian of St. Clement Secondary School, Gbaiko, Minna, Niger State, this year, scored 302 in her JAMB, 278 in Post UTME at the ABU Zaria entrance exams. She has 6 A1s (including Maths, Biology, Physics and Chemistry) in her WAEC yet ABU Zaria denied her admission to study her course of choice, Medicine and Surgery."

It was Miss Thomas' birthday yesterday, when her former teacher felt obliged to let the world know about this injustice and made this clarion call. She said, "I believe that Social Media can be a tool for positive change, therefore, I call on the management of the Amadu Bello University Zaria to review this case and grant her the admission she deserves or at least tell the public what their admission criteria are for the Medicine and Surgery Department of their school."

The teacher added, "My question is, who were those admitted? What did they score? How many of those people scored 300+ in JAMB? Goodness is just another victim of Nigeria's preference for mediocrity in disguise of quota system. If we must make meaningful progress as a nation, we must begin to encourage excellence. Please help me share this till a management staff of ABU Zaria or the Joint Admissions and Matriculation Board sees it."

“Let the nation cry out against this injustice. The injustice/discrimination that Christians suffer as a way of life, in the North in all spheres, even Christians from educationally disadvantaged states of Kebbi, Zamfara, Katsina and other Northern states are denied their state quota admission to read courses of their choice, in spite of their performance, because of their faith,"

she alerts.
Princess Funmilayo Adesanya-Davies, therefore said that, "life cannot continue in this manner, for Christians in Nigeria as from 2020. She appealed to the international community especially USA to wade-in as they have done in the release of Omoyele Sowore to help and rescue Leah Sharibu. The Nigerian government should tell us if Leah is dead or not. "Enough is enough", she begs, what has the Christian community done in Nigeria to deserve all these! Please help us, as Nigeria has just been added to the USA watch list this week.

"The U.S. Department of State in a statement at the weekend has placed Nigeria and six other countries on a watch-list over their approach to religious freedom.

The other countries are: Sudan, Russia, Cuba, Nicaragua and Comoros Island. The U.S. also designated some terrorist groups including Al-Qaeda, Boko Haram, ISIS and the Taliban as “Entities of Concern”. Moreover, U.S. State Department said Nigeria trended negatively in 2018, also added that the Federal Government “failed to prevent or stop violence or hold perpetrators to account.”

The Christian Association of Nigeria CAN, "has commended the U.S. for standing on the side of the oppressed and the truth” and urged the government to implement its policies based on the dictates of the constitution. Adding that, “the bitter truth is that Christians are yet to be given any sense of belonging in the nation since this government came on board. And “CAN welcomed the placing of the country on a special watch list by the U.S. despite the fact that we were not contacted before the decision was taken." It is heart warming, Adesanya-Davies commented.

Also, Adesanya-Davies commended the senators of the United States of America and the American government for putting pressure on the Nigerian government until the release of Omoyele Sowore and Dasuki, said if not for their pressure, Sowore would still be languishing in DSS detention without charge till today, Christmas day. Truly the American government is the police of the world and we are proud of them.” She thus calls on the USA, EU, UN and all lovers of democracy including Nigerians in diaspora to put more pressure on the Nigerian government, to release LEAH SHARIBU.

The United Kingdom has recently reminded President Muhammadu Buhari on the importance of obeying the rule of law, saying it is “fundamental for democracy to thrive”; Deputy UK High Commissioner, Gill Atkinson, said this while commending the Nigerian Government over the release of Sowore and Sambo Dasuki. Prof. Funmilayo Adesanya-Davies thus said, “This is a welcome development, however, "it is not yet Uhuru", IT IS ALSO TIME TO RELEASE LEAH SHARIBU!