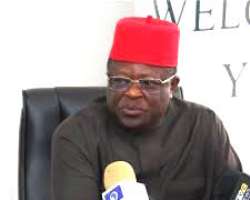 They also agreed that the new wage increase will commence from January next year.

This followed months of negotiations between the Joint Negotiating Council and the State Government on the new minimum wage especially on consequential adjustment table to be used.

With the signing of the new minimum wage salary table at the Executive Council Chambers, the state government is now poised to begin implementation from January next year.

Commissioner for Finance in the state, Prof Ogbonnaya Chukwu, in a remark, said both sides agreed that Civil Servants from grade level one to six will get a consequential increment of 59 percent.

Workers from grade level 9 to 14 are to get upward salary adjustment of 10 percent while those on level 15 to 17 will get 8 percent adjustment.

He however noted that the state government and labour agreed that there will not be any arrears paid to the workers as the state does not have the financial ability to do so.

Chairman of the Joint Negotiating Council (Labour's Side), Patrick Ok Onyekwe in his remark noted that the table was agreed upon by both sides without any imposition.

The state Governor, David Umahi thanked Labour for the peaceful way the issue was resolved.

He reiterated the commitment of his administration to partner with Labour to move the state forward.

The governor, however, urged the Organised Labour to join hands with government to shore up the Internally Generated Revenue (IGR) of the state so as to be able to meet the responsibilities to the workers.

The state Head of Service, Commissioner for Local Government and 13 Local Government Chairmen signed for goverment while the Chairman and Secretary of the Joint Negotiating Council signed on behalf of the Organised Labour in the state.