Tackling the Scourge of African Dictators 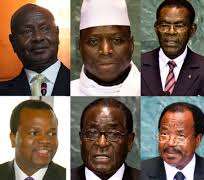 One perennial challenge with leadership in Africa is that of the emergence of dictators in the continent after most of the nations received their independence from their various colonial masters. These dictators had the mindset of monarchs and ruled or planned to rule till their earthly demises.

They were short sighted and lacked the vision needed for Africa’s massive development as they were only concerned with lining their own pockets and enjoying the numerous perks of office. They were very much different from dictators like the Chinese Mao Zedong, Malaysia’s Mahathir Mohammed or the Singaporean Lee Kuan Yew who though were dictators were benevolent ones and used their long term rule to develop their countries and harness their potentials. Their African counterparts on the other hand were only keen on salting away the fortunes of their nations and killing off the opposition to ensure that only their voices were heard in the country.

Many of these dictators were liberation fighters who failed to transmute from successful independence fighters into visionary leaders.

Dr. Osaygefo Kwame Nkrumah of the then Gold Coast now Ghana was one such leader. He came back home in December 1947 after spending twelve years in the US and UK on an educational exile. He was made the general secretary of the first truly broad based nationalist political party in the country: The United Gold Coast Convention (UGCC) which was formed in Salt Pond earlier that year to press for political independence for the country which was rich in gold and cocoa.

His charisma and organizational ability made him build a truly widespread party as he spread the party’s branches all across the country. The following year, he and five other leaders of the party were jailed for the riots which the cocoa farmers were involved in. The other leaders who were rather conservative blamed his radical stance for their woes and he had a break with them in 1949 when on June 12 he formed the Convention Peoples Party (CPP) with the slogan ‘self government now’ and built a massive power base across the country which included women who before now had been largely disenfranchised. Another riot broke out and he was arrested by the British colonial authorities and jailed in Fort James. The 1951 elections were held with Nkrumah and most of the CPP leaders being behind bars but the UGCC failed to build a nationwide structure and hence failed to take advantage of the physical absence of Nkrumah and his allies in jail as the CPP won with a landslide victory and he was invited to become the leader of government business that same year and led the nation to independence on March 6, 1957.

Tragically, he became a dictator as he got the CPP dominated parliament to pass a law making him the President for life and giving him broad powers to jail his opponents without trial. He jailed his erstwhile political master, Dr. Joseph Danquah, the first African to hold a doctorate in law who died in detention in 1965. Many opponents most notably Dr. Kofi Busia who later became the Prime Minister in 1969 were forced to go into self imposed exile for the fear of their precious lives.

After his overthrow in 1966 after a nine year rule, the streets were filled with jubilation as he had degenerated from a liberation hero with the title Osagyefo to a villain.

Robert Mugabe spent a decade in prison while fighting to get rid of the British colonial authorities in the then Rhodesia. He travelled the length and breadth of the nation after his release championing the cause of independence and built a gargantuan power base.

Independence came in 1980 and he led his ZANU-PF to power by becoming the nation’s first Prime Minister. He went after his nemesis, Joshua Nkomo by ensuring he went on exile and even after he came back, he made him his Vice-President with virtually no powers so much so that the tribe of the latter accused him of selling out. He massacred the Ndebele tribe in 1987 as they were opposed to his misrule. He ensured he continually rigged himself back to power during every election and under his watch, the nation slid from being the food basket of the continent to one of the world’s poorest. A joke which sadly depicted the reality of the country went thus: It is better to steal a loaf of bread than to pilfer a lorry load filled with the local currency as the latter was utterly valueless. A military putsch two years ago ended his 37 years of ignominy and his death this year at 95 was a sad end for the dictator as he was deserted by all including his wife whom he wanted to succeed him.

Gnassingbe Eyadema came to power in a bloodless coup in 1967 and ruled Togo, the tiny country with an iron fist till his death in 2005. His son, Faure has been in charge of the country since then and recently changed the constitution to allow him run for a third term with bloody consequences.

Paul Biya has been the strong man of Cameroon since 1982 and has shown no sign of wanting to step down. There has been the repression by his Francophone forces of the attempts by the Anglophones to protest their exclusion from his government. Peaceful protests have been replied with violent reprisals and life for the common man in the resource rich country is hell on earth.

Teodoro Obiang Nguema Mbasogo has been the President of Equatorial Guinea since 1979 and recently installed his son as the Vice-President with nepotism running through his government like blood does to the veins. He has no plans of voluntarily handing over power after over four decades of being in power.

We recall Joseph Desire Mobutu a.k.a Mobutu Sese Seko who was far richer than his country before his overthrow by Laurent Kabila. Africa is indeed cursed!

We need Nelson Mandela like more leaders desperately as the world has left the continent far behind.

Mo Ibrahim has an award and financial reward for visionary leaders and we hope he continues his good gesture so as to inspire potential leaders to do more for their countries. The international community should put pressure on African nations with dictators as well as impose heavy sanctions on them so as to discourage the practice. The African union should also do more to stem the tide as it is embarrassing that dictators still exist in the world’s second largest continent in the 21stcentury.

Popular peaceful protests – the bloodless clone of the Arab Spring should be greatly encouraged as people’s power will always triumph over that of autocrats.

Africa must not rest till dictators become confined to the history books.