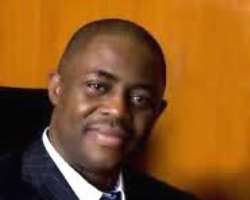 The former Aviation Minister and a Peoples Democratic Party (PDP) chieftain, Chief Femi Fani-Kayode has condemned the attack on the residence of ex-President Goodluck Jonathan by unknown gunmen.

Fani-Kayode urged the Federal Government to beef up security around Jonathan, following the attack. It was gathered that about three of the gunmen were also killed by the soldiers, who foiled their attempt to break into the former president’s house.

The gunmen were said to have come through the river on five speedboats and opened fire on the soldiers.

The hoodlums, who came in about five engine boats, stormed the security post located about 100 metres away from former president’s residence by 1:30 am on Tuesday and attempted to take away a gunboat belonging to the military stationed at the creek beside the residence.

They were, however, resisted by soldiers who engaged them in a gun battle.

However, Fani-Kayode in a tweet wrote: “The attempt to murder @GEJonathan and the attack on his home is the most dangerous event that has taken place in the last 5 years.

“If the attempt had succeeded it would have set Nigeria on fire. I commend those that were killed protecting him. I urge the FG to beef up his security.”