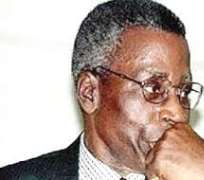 Chief James Ajibola Idowu Ige was murdered in cold blood on the 23rdof December, 2001 in his home in Ibadan, the former capital of the western region. His death greatly shook the political firmament of Nigeria and was the precursor of the numerous deaths that were to follow in the fourth republic.

He was born in Kaduna, the former capital of the defunct northern Nigeria to a humble family and by dint of hard work and the grace of God rose to the top of his chosen profession – the legal profession and his vocation – politics.

He moved to the west at the age of thirteen in 1943 and attended the prestigious Ibadan Grammar School and the University of Ibadan where he studied Classics.

His leadership traits manifested early in life when at the age of twenty-three he became the organizing secretary of the defunct Action Group in 1953. He used his charisma and natural organizational ability to increase the membership of the party far beyond the west where it was founded in 1951 as an off shoot of the Egbe Omo Oduduwa.

He later studied law at the University of London and was called to the inner temple bar in 1961. He returned home immediately and formed Bola Ige and co, a law firm which produced many legal luminaries.

He became the Commissioner for Agriculture in the western region under the military governorship of General Robert Adeyinka Adebayo between 1967 to 1970. He did his best to ensure the presence of massive mechanized farming all through the region and used tact as well as diplomacy to effectively contain the Agbekoya riots which broke out among peasant farmers during the Nigerian civil war.

When the then administration of General Olusegun Obasanjo allowed the return of partisan politics in 1978, he joined the Unity Party of Nigeria founded by his political mentor, Chief Obafemi Awolowo and became the first civilian governor of Old Oyo state after defeating the candidate of the National Party of Nigeria, Chief Richard Akinjide who was later to become the Attorney-General and Minister for Justice in the Second Republic.

He ensured the strict implementation of the free education policy of the UPN all through Oyo state and established the Ladoke Akintola University of Science and Technology (LAUTECH) amongst other great projects he established in the state which endeared him to the masses who continually sang his praises. He surprisingly lost the re-election in 1983 to Dr. Victor Omololu-Olunloyo of the National Party of Nigeria and he unsuccessfully challenged the outcome in court.

After the collapse of the Second Republic, he was alleged to have embezzled public funds and was incarcerated by the Muhammadu Buhari led regime. He was released in 1985 after Buhari was overthrown by Ibrahim Babangida and returned to his legal practice and writing.

A polyglot, he spoke the three major languages fluently – Hausa, Yoruba and Igbo as well as Latin.

A prolific writer, he wrote many books among which were:

He became a Senior Advocate of Nigeria (SAN) in 1997 and used the instrumentality of the law for the advancement of his people.

During the Sani Abacha years, he became a vocal critic of military rule and was a target for assassination by the dark goggled General who was highly intolerant of opposition. Ige, an orator fondly referred to as Cicero of Esa Oke and a wordsmith referred to Abacha’s five political parties as the ‘five fingers of a leprous hand’ and greatly criticized his bid to succeed himself as a civilian leader.

When the fourth republic berthed, he contested for the presidential ticket in the Alliance for Democracy party and lost in very controversial circumstances to Chief Olu Falae, a former top bureaucrat.

He later accepted the invitation to serve in the government of Chief Olusegun Obasanjo first as the minister for power and steel and later as the Attorney-General and Minister for Justice. As Justice minister, he campaigned against the spread of Sharia law all over the country and was able to save a woman in Sokoto state from the death row as a result of the Sharia law.

His death in 2001 prevented him from becoming a member of the international law commission of the United Nations which he had been penciled down for.

It is tragic that after serving his nation for decades, cowards masquerading as political adversaries could kill him like a fly. The cowards couldn’t stand his gargantuan political stature and so they had to resort to snuffing life out of him with a single bullet that pierced through his heart while his compromised security details went to have a meal.

The Buhari administration would definitely pull a coup de grace if his killers can be found through their efforts. He shouldn’t be allowed to die in vain as the nation deserves to know who cut short his life while it was sweetest to him.

May his gentle soul continue to rest in peace and the government should do all they can to immortalize the late Asiwaju of Esa Oke who laboured all his life for good governance.