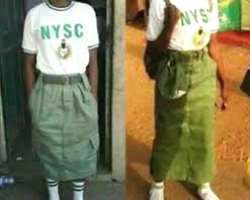 The Prominent Civil Rights Advocacy group- HUMAN RIGHTS WRITERS ASSOCIATION OF NIGERIA (HURIWA) has been told by the management of the National Youth Service Corp (NYSC) that it will only rescind the dismissal of two Christian corpers who wore skirts to camp in Ebonyi unless a matter instituted by one of them is determined.

HURIWA had on November 12th 2019 protested to the Director General of the National Youth Service Corp(NYSC) Brigadier General Shuaibu Ibrahim demanding the at he ordered the reinstatement of the two female prospective Youth Corp members dismissed in Ebonyi State for failing to wear trousers due to their religious belief.

HURIWA said the two female corps members in the 2019 Batch C Stream 1 in Ebonyi camp were de-kitted for refusing to wear shorts, trousers justvas the Batch C members of the corps are currently undergoing the three-week orientation exercise nationally.

The Rights group quoted the spokesperson of NYSC in Ebonyi State, Ngozi Ukwuoma as alleging that the two corps members were spotted by the Camp Director, Mrs.. Isu Josephine, and her team during a routine morning inspectioction een as Ukwuoma said the two ladies were wearing their official white T-shirt upon white skirt. Officially, white T-shirts are worn atop a pair of white shorts.

HURIWA recalled that the spokesperson said, “efforts were made by the office of the CD to make them see reason why they must obey the rules and regulations guiding the orientation and NYSC, but all efforts to do that proved futile even as the matter was officially reported and the proceedings for de-kitting were initiated with the corps members queried and subsequently made to face the camp court, where they were found guilty, having stated categorically that they were ready to bear the consequences of their actions.

HURIWA said although the NYSC's court recommendations were submitted to the camp management and the camp director was directed to de-kit in the presence of security agents, who also escorted them to the gate as they left the camp, but the Rights group in a statement by the National Coordinator Comrade Emmanuel Onwubiko and the National Media Affairs Director Miss Zainab Yusuf said the unanimous decision of the Rights body is to communicate to the management of the NYSC in Abuja to pray that the two rusticated coroners be recalled given that their objection was supported by their religious faith.

HURIWA said it is imperative that a universal standards of regulations are observed in a national integration scheme for the youthful Nigerians like the National Youth Service Corp (NYSC) but stated that it would be unfair and unjust to allow Moslem corpses who want to wear hijab to so do but at the same time to deny other faithful religionists different from the Islamic faith group the same privileges accorded the MOSLEMS since this would amount to a violation of section 42 of the Nigerian Constitution of 1999 as amended.

NYSC Approves White Hijab For Corps Members Tony Nwanne October 1, 2019 News Leave a comment 8 Views The National Youth Service Corps has said that it will allow female corps members, who are Muslims, to use white, shoulder-length hijabs for religious purposes. This was made known in a document released to newsmen on Monday in Abuja.

The NYSC also added that only three types of dressing used for different occasions would be acceptable for corps members. The document reads, “The modes of dressing for corps members are classified into three categories, which are used for different occasions. One, within the camp during the orientation programme, their normal attire, except otherwise directed, consists of a pair of white shorts with a white vest and white canvas shoes and socks. “Two, for ceremonial purposes, the proper dressing is crested vest on top of a pair of Khaki trousers.

However in a letter by the Director General of NYSC which is undated but submitted to HURIWA on December 23rd 2019 endorsed by Adenike Adeyemi(MRS) the director of Press and Public Relations for Director General of NYSC,the management stated as follows in a reply titled: "RE: A LETTER OF APPEAL TO RECALL DISMISSED CORPERS FROM EBONYI NYSC’s CAMP" thus: "I am directed to refer to your letter dated 12th November, 2019 on the above subject matter. First and foremost, we thank you for Huriwa’s sustained interest in the affairs of the NYSC as a friend and critical stakeholder.

In addressing the material issues contained in your letter of Appeal, made on behalf of the two recalcitrant corps members dismissed from NYSC orientation camp, Afikpo, Ebonyi state , arising from their inordinate disobedience to constituted authority, we cannot agree less with you regarding ‘’ Sanity of discipline as a centre piece of good governance ‘’ as you aptly captured in the letter.

In pursuit of the above maxim , the NYSC scheme, a training ground for qualified Nigerian youths and products of statute, NYSC Act,CAP N84, Laws of the federation of Nigeria, 2004, which has been embedded as section 315(5) (a) in the 1999 constitution as amended, is predicated on the tripod of discipline, decency and order . This is with a view to preparing the youths adequately for the promotion of national Unity, sustainable development, self-reliance and challenges of leadership as encapsulated in the mission statement of the scheme. Therefore, the refusal of the two subjects to adhere to the dress code of the scheme is a direct assault to discipline, decency and order

It is pertinent to state that in no way has the fundamental human rights of the ex-corps members been undermined as the scheme, being a responsible and responsive organization is very much conscious of citizen’s right to worship . Our insistence that corps members must conform to the camp rules and regulations, including the dress code , is in consonance with the corps philosophy of the scheme which is impartation of discipline, as absence of discipline, undeniably breeds disorder.

Thus , abdication of the responsibility of enforcing rules and regulations by pandering to the whims and caprices of corps members obviously is an invitation to anarchy.

Although NYSC many years ago permitted the use of white hijab, which must not be more than shoulder-length long for Muslims corps members, in the same vein, Christian corps members, particularly catholic reverend sisters, are permitted to put on veils , which must be of equal length with the hijab.

The scheme in keeping the dictates of the decency and will not condone the promotion of indecency which adorning of skirt for camp activities portends, since wearing such apparel will unduly expose the female corps members indecently, leaving little or nothing for imagination.

we have seen the picture of supposed female cops members in black skirt. Purporting to be on parade in the 70’s trending on the social media which you innocently annexed to the appeal letter . The purpose of the picture was to show that at one time , the scheme had allowed skirt as NYSC uniform. However, we want to emphatically state that In an NYSC orientation camp , there cannot be a parade of all females, thereby puncturing the veracity of that picture which goes to show that such parade did not occur in NYSC orientation camp.

That notwithstanding, as managers of the scheme and custodians of records , we state unequivocally that the corps has maintained only one dress code since inception.

The dress code has been a subject of litigation by both Christians and Muslims Corp members, and the scheme has triumphed. For instance, in suit No. FHC/ASB/CS/90/3015 : Rita Agbedeyi versus Attorney -General of the federation, Director General NYSC, State coordinator Delta and others , the plaintiff was adamant that she would not put on NYSC Khaki trousers for religious belief. However, on seeing the demerits and futility of her ill-advised action, she sought out-of-court settlement. Be that as it may, the presiding judge was insisting that she must put on the uniform.

.
It is important to mention that one of the dismissed ex-corps members in Ebonyi state, love obianuju okafor (EB/19C/0523) has already approached the federal High court Abakaliki in suit No. PHC/AI/CS/93/2019 dated 29th November, 2019 to enforce her fundamental rights against NYSC ( Copy attached). Therefore, the issues has become subject of litigatiob (sujudice) as the law needs to be allowed to take its course.

In the light of the foregoing, and in response to your prayer, we are constrained to state that in so far as the two dismissed ex-corps members remain averse to obedience to lawful order , they remain dismissed from the scheme. Getting them readmitted without their showing contrition and readiness to obey the Bye-laws of the scheme will mean setting a dangerous precedent capable of throwing open floodgate of absurd requests for individuals dress codes.

Nonetheless, with the benefit of hindering, it is our fervent hope that as a foremost organization bordering on human rights, You would help in advising the less informed on the appropriate NYSC code and the philosophy behind it.

Please, accept the assurance of the Director-General’s consideration. "